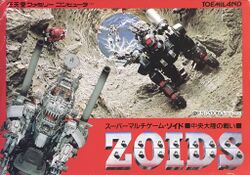 Zoids: Chuuou Tairiku no Tatakai (ゾイド 中央大陸の戦い, Zoids: Chuuou Tairiku no Tatakai? lit. Zoids: Central Continent Battle) is a game developed by Micronics and published by Toshiba EMI. It is based upon the ZOIDS toy license. Zoids are a collection of mechnical toy models meant to represent gigantic cybernetic war machines whose designs are entirely based upon a variety of animal species, real or fantasy. This game was only ever released in Japan for the Famicom and MSX2 home computer system. It was never translated from the original Japanese language.

The player takes control of the primary character throughout the first three anime adaptations of the series, the Godzilla-like Zoid known as the Gojulas. Gameplay is actually a mix of traditional RPG elements such as walking through towns, approaching others and talking to them, and walking across a large tiled overworld map. However, when enemy encounters take place, the game switches to a first-person perspective, allowing you to do battle against other Zoids from a perspective similar to the one used in Battlezone. The overworld view employs a system called the "Symbol Encounter" system, which enables the player to see enemy Zoids that are in pursuit and wish to attack the player. Battles take place when the player occupies the same space as an enemy Zoid, at which point the player is given an opportunity to run away, or to engage the enemy.