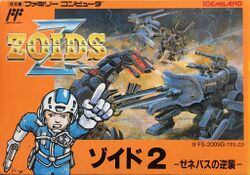 Zoids 2: Zenebasu no Gyakushuu (ゾイド2 －ゼネバスの逆襲－, Zoids 2: Zenebasu no Gyakushuu? lit. Zoids 2: Counterattack of Zenebas) is an RPG developed by Micronics for the Famicom, and published only in Japan by Toshiba EMI in 1989. It is the sequel to the original Famicom game, Zoids: Chuuou Tairiku no Tatakai, and also features characters from the Zoids model-kit toy series from Tomy (now Takara-Tomy). Zoids 2 also features the same developer/publisher combo of Micronics and Toshiba-EMI.

As with the first NES Zoids, Zoids 2 is an RPG of the Dragon Quest variety that switches to first-person shooter battles when fighting other Zoids. The world of Zoids 2 is still every bit as incongruously medieval as the first game's world.