Zoo Keeper is an arcade game created by Taito Corporation in 1982. It began life as a slightly different game involving a crab trying to contain tadpole eggs, but the idea morphed into a zoo keeper attempting to return the escaped zoo animals back to their cages. It was one of the few American-designed games that Taito released (with Qix and Space Dungeon being two others).

In this game, Zeke the zoo keeper must control a menagerie of wild animals and keep them behind the walls of a zoo. The walls of the zoo are built beneath Zeke's feet as he moves around the outside of the zoo with one cage in the center. In early rounds, the wall is partially built when you start, but in later rounds, Zeke must build the wall from scratch.

Unfortunately, Zoo Keeper came out just before the video game market crashed in 1983, and it was never picked up for conversion to any home system. It finally came home for the first time in 2005, as part of the Taito Legends classic compilation. 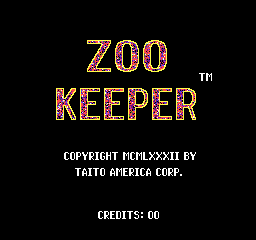 In Zoo Keeper, the player's character, named Zeke, is a zoo keeper whose girlfriend, Zelda, has been kidnapped by a malicious monkey. To distract Zeke, the monkey has unlocked the cages in the zoo, allowing the animals to escape. The player must control Zeke to run, jump, build walls, and collect bonus items in an effort to recapture and contain the animals before finally rescuing Zelda.

This is Zeke, the friendly zoo keeper who is trying to rescue his girlfriend Zelda, and keep all of the escaped animals in the zoo. On most rounds, Zeke's movement is restricted to the perimeter of the zoo. As he walks around, he can reinforce the structure of the zoo wall with lightning fast speed. Zeke is also an exceptional jumper, he can change directions even while in midair. Zeke must avoid touching any of the animals at all costs, or he will lose a life. If Zeke manages to grab hold of a net, he will able to send animals back inside the zoo for a limited time.

All of the animals behave the same, but some are faster and stronger than others. While inside the brick interior of the zoo, the animals bounce around, back and forth, crashing into the bricks. Depending on the strength of the animal, they will either chip a little bit away, or rip out a huge section. Ultimately, they try to expose a hole in the bricks through which they can escape. Once they make it to the outside, they run in the opposite direction from Zeke and continue to run like that forever until they are caught with a net. If one touches Zeke without a net, he is done for.

The first round consists only of elephants, with each subsequent round adding the next animal in the sequence below. Lions are worth 30,000 points when they first appear in round 6; this value increases by 10,000 points per round to a maximum of 70,000 in round 10.

Zelda is held by the monkey at the top of the moving platform stage. She is tied to the palm tree is awaits your rescue. Next to her, the misunderstood monkey swings from the limb of a coconut trees and rains coconuts down on Zeke as he tries to jump from one platform to the next in an effort to reach Zelda. If Zeke is hit by a single coconut, he loses a life and must start the round over. Once Zeke makes it to the top and rescues Zelda, the stage comes to an end.

Near the top of the screen is a timer which controls a series of bonus objects appearing along the walls. As time runs out the line becomes shorter and it will touch an object placed along it. When it does, that same object appears somewhere along the walls and can be picked up for bonus points. If the timer reaches the nest object on the line before Zeke has picked up the first, the first one will disappear. The point value for each object varies. The first one is worth a set amount of points, and every subsequent collection doubles in value. 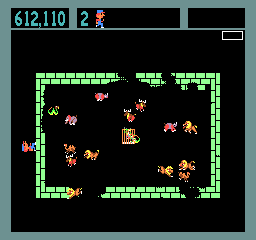 Keep as many animals in as possible

Zeke's movement in this stage is restricted to the perimeter of the zoo. At the beginning of the rounds, take note of which direction the animals are moving (clockwise or counter-clockwise). Then go that opposite direction, so that they will be coming towards you and you can jump them. In this stage, the big points come from jumping animals. On higher rounds, millions of points are possible just from one jump. On lesser attacks than this, it's possible to begin the jump, pull back on the joystick halfway through, and land Zeke back where he started, still getting points for the try. And since Zeke is back where he started, he can attempt the jump again.

Besides the bonus objects described above, there is one other thing that appear on the walls. This is a net that can be used to capture any of the animals that escape. The net only lasts for a short while, and a warning sound will alert you before it disappears. Multiple nets appear as bonus items in later stages.

In the first round, one elephant is loose and running along the walls. If you don't jump it and the animal kills you, you will be given another chance because it seems like you need one. It's not a bad idea, then, to pick up some of the bonus objects and then intentionally kill Zeke by running him into an elephant. Then you'll get to try the board over again from the beginning and pick those points up for a second time. The second round is similar to the first. 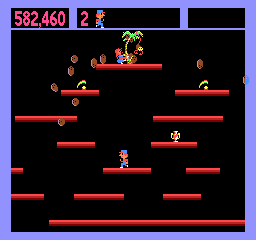 Avoid the coconuts while you jump up

The Platform stage occurs after every second Zoo stage. It contains a series of horizontally moving platforms. The top ledge does not move, and on it sits Zeke's girlfriend Zelda tied to a tree. A monkey is hanging by its tail from the tree, hurling coconuts into the air. Zeke begins from the bottom and jumps up the ledges until he reaches the top one with Zelda on it. Some of the ledges have bonus objects on them, which are worth more as you get higher. Just landing on a ledge will score you points. Make sure Zeke doesn't run into any coconuts, and that when he reaches the top he touches the girl. The round is not over until he does so, and there's still a chance of being hit by a coconut. If Zeke lands right on the girl, you won't get any points for landing on the ledge; and since it's the highest ledge (and worth the most), you should try to avoid landing right on top of the girl when you get there. (In fact, while you earn the same score every time you touch the other platforms, the value of touching the top platform doubles every time you leap off of to another platform, and back on.)

As soon as this round begins, the bottom ledge that goes all the way across the screen begins moving toward the right. If on Zeke's way up you make a mistake and he falls, you have to guide him to one of the lower ledges to save him. If he falls all the way down and goes through the hole that the bottom ledge is creating, you will lose a turn. On Zeke's way up watch for coconuts. They move very slowly, and if one is bouncing on the ledge that Zeke is on you should move him as soon as possible. If another ledge is passing overhead at this point it is impossible to go up so you should send Zeke down. 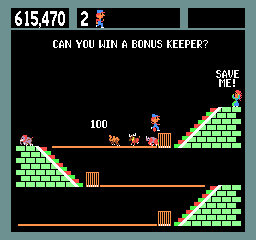 Jumping over the cage can be difficult

Extra turns can be won on special rounds that occur after every Platform stage except for the first. Zeke begins in the lower left corner and you must move him to the right, jumping animals and one cage to reach the stairs. Once up the stairs, go to the left, jumping more animals and another cage to reach yet another staircase. If you get Zeke up these stairs, Zeke's girlfriend is once again saved and you'll receive an extra turn. But it you let Zeke touch an animal on this round you will lose a turn. The object here is gaining a turn, not losing one, so extra care should be taken. Don't get hung up on the cages when trying to jump them. Back up a little and try again. If you take too long jumping animals on a single floor, a continuous stream of them will begin to appear, from which you have very little chance of escaping. After the first two Bonus stages, a third floor as added to the stage. The remaining bonus stages contain four floors.