From StrategyWiki, the video game walkthrough and strategy guide wiki
< Zork II: The Wizard of Frobozz
Jump to navigation Jump to search

Zork II: The Wizard of Frobozz | Table of Contents | Walkthrough

Zork II is a continuation of the world of Zork I. You are a treasure hunter who has set off into underground ruins looking for adventure and fortune. At the end of Zork I you have reached a barrow, which is where this next adventure begins. This time you will be exploring an area of the Great Underground Empire (often found abbreviated in the game to GUE) under the control of the Wizard of Frobozz. When his powers started to fade he was exiled here, and as a result began to go a little crazy, but he is still powerful. Your goal is to avoid his tricks and control his powers, collecting treasures along the way. 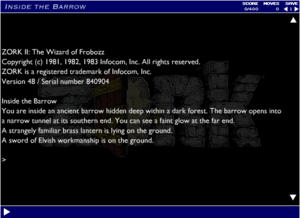 As soon as you start up the game, it immediately starts you off in the first room, with no menu. In nearly all versions, the name of the specific room you are currently in is displayed at the top left, while the score is listed at the top right. In early versions, this is displayed as Score: 0/0, where the first number is the number of points you have earned from solving special puzzles and gaining treasures, while the second number increases by 1 for every move you make, which also indicates the progression of time. In later versions, these were separated into "Score" and "Moves", and the pictured version even displays the score as being out of 400 points, as that is the maximum score possible.

After the initial title text, the game officially begins. Whenever you enter a room, the name of the room will display in the main field as well as in the top bar. If it is also the first time you have reached this location, it will then display a description of the room. After the description will come a list of items and creatures visible in the room, if there are any. As you make moves, if anything changes about these items/creatures or the room, this will be displayed after the direct result of your move is displayed. When reaching a location you have previously been to, the name of the room and the items/creatures in the room are displayed without the description.

At the very bottom will always (except if the game has ended) be a command prompt >. This is where your commands are typed, and then simply press enter/return to execute it. What follows will be the direct result of your command, as well as any additional info as described above.

In the displayed web version, there are scroll buttons on the right. In most earlier versions, these do not exist, and if the required display text is too long, it will display as much as it can in one screen, then display "MORE" at the bottom, indicating that when you press enter, it will continue displaying additional text.

You are the main character of the story, and your text commands tell the game what you are doing. You can move around, pick up items, use these items, talk, and more. The game is very much about solving puzzles, and so never assume a blocked path will be permanently blocked. Feel free to try any crazy idea you have... who knows, maybe it will get you something new! Also be aware that there will be many puzzles you will not be able to solve on your first time reaching it or without a certain item from elsewhere. Be sure to read all of the text in descriptions of places, objects, and events, as there may be clues in them that you need in order to figure out how to solve certain puzzles.

Time progresses only as you give commands. If you wish for time to pass in the world without actually doing anything yourself, simply type WAIT and the game will progress 3 moves' worth of time, or fewer if something noticeable occurs sooner.

Due to the all-text nature of the game, even with the scroll buttons, it is recommended for players to draw their own map as they progress, possibly keeping additional notes that may help them remember what to do or where to go later on. The game will usually tell you every possible direction you can go from your current location in the description, but not quite always, so feel free to try going any of the 8 compass directions, up and down, or even in and out of certain things. Also, in some cases your returning direction may not be the exact opposite of the direction you came. For example, you must travel SOUTH from the foot bridge to get to the great cavern, but NORTHEAST from the great cavern to get to the foot bridge.

All commands can be typed in capital letters or lowercase with no difference, but for the purposes of highlighting them, they will be all capitals here. Zork (which happens to also be the name you can address your text interpreter by) only analyzes the first 6 letters of each word, so CANDLE, CANDLES, and CANDLESTICK will have no difference. Generally you will want to type actions as at least two words including a verb and a noun, though there are numerous words that can be used by themselves as well.

Zork is designed so that you can word things in multiple ways and achieve the same result, such as LIGHT LAMP, TURN ON THE LAMP, TURN THE LAMP ON, ACTIVATE THE LAMP, and LIGHT THE BRASS LANTERN. If only one logical noun is available for a verb to apply to, sometimes only the verb is necessary, such as simply LIGHT accomplishing the same as the previous sentence examples if there is nothing else to light. If there are multiple things, Zork will then ask you a question such as, "What do you want to light?", to which you can simply reply LAMP without including your verb again. Zork even recognizes more complicated sentences such as PUT THE GOLD BAR AND THE PEARL IN THE TROPHY CASE or GIVE ALL BUT THE PENCIL TO THE NYMPH.

Ultimately, try whatever words you like. If Zork doesn't understand, it will tell you so and stop trying to interpret your action. Then you can reword and try again. If no easy synonyms for a word result in Zork understanding, it is very likely not a useful word in the game.

In general, you can always at least attempt to move NORTH, SOUTH, EAST, WEST, NORTHEAST, NORTHWEST, SOUTHEAST, SOUTHWEST, UP, and DOWN. These can be abbreviated with N, S, E, W, NE, NW, SE, SW, U, and D. They may not always get you anywhere, but if possible, you will move in that direction to another location. There are also times where IN and OUT will work, such as entering a gazebo within the garden.

Zork doesn't know that much more than he tells you, but you can ask him WHAT or WHERE about certain things, though he may just respond that he doesn't know anything about that.

You can address in-game creatures by typing what they are, putting a comma, and then typing what you would like to tell them. For example, GNOME, GIVE ME THE KEY may cause the gnome to react in some way. If you want to instead just say something out loud, you can type a word such as SAY or ANSWER followed by quotation marks around whatever it is you wish to say.

These do not take up a move, except when noted.

[Go to top]← Zork II: The Wizard of Frobozz | Getting Started | Items →