For a first stage boss, Hecatarian is extremely difficult. For this reason, you will want to make sure that you a) power the Syd up as much as possible, and b) save the best armor that you can get, and the energy to activate, until you encounter the boss. As soon as you encounter him, activate the armor and start nailing the center body as quickly as possible. It shoots three types of projectiles; a spread shot, three large slow moving objects that block your lasers, and a dividing homing shot, all of which are difficult to avoid. Nail the core as quickly as possible. The core will first flash red, then turn red and flash yellow, then explode. Mekapuku is nearly identical to Hecatarian, although it sends more laser blocking projectiles at you.

Compared to the first boss, Hanomas Zuey is far easier. It is immune to your lasers, and can only be struck by missiles. It also has three different shots, although he rarely fires them simultaneously. It has a spread shot, an incredibly quick fireball, and the same triple energy balls that home in on your position. It flies around in a figure eight, and you can lead it with your missiles, so as to stay away from its center where the fireballs are shot from. The Zorenia Zuey behaves very much like the Hanomas Zuey, except that it tried to lock on to you with fireball attacks more frequently.

Shariputra steps up the difficultly level again. The good news is that it is vulnerable to your lasers, but the bad news is you can damage it by hitting the head, which it frequently covers with its claws. It combines several methods of fire at once. It either fires spread shots or homing balls at you, while constantly shooting out very quick fireballs from its center. You must be very quick to dodge the fireballs, as you cross from one side to the other. Armor is a must through this battle, although Shield armor will suffice if your lasers are powered up enough. The MK II version speeds up the rate at which it covers its head, and attacks with fireballs.

The Bombonera is an extremely difficult boss and definitely requires the use of a powerful armor. The only vulnerable location on its entire body is the head. Shooting any other part of it is ineffective. It moves very quickly, and fires spread shots in rapid succession, making it extremely difficult to dodge. When it's damaged enough, the spread shots become solid, blocking your laser, so you much maneuver around them to get a clean shot in. The MK II version is essentially identical to the first, although slightly faster.

When fighting Gigabit, you are up against not one, not two, but three separate entities, two of which appear on the screen at any one time. They each have their own separate health, so you must chip away at them individually. They spawn at random locations on the screen throughout the battle, and they fire off the usual assortment of boss weapons before disappearing from the screen. Since you can't predict where they will turn on next, your best bet is to simply worry about the bullets they fire, and fire your own lasers continuously in hopes of striking one when they reappear. You will eventually wear each of them down until they are destroyed. Terabit is identical to Gigabit, except that you must defeat four of them instead of three. 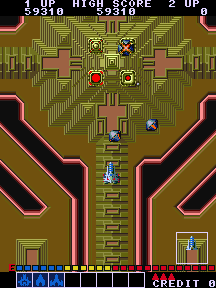 The Jojo Zeze fortress is only vulnerable to missile attacks. At the start, there are four pyramids which open periodically to fire spread shots at you, or to launch a spherical droid. This droid circles around, and will fire a new spread shot at you if destroyed. You must destroy all four pyramids with your missiles to expose the center pyramid. This pyramid will up the ante by sending laser blocking projectiles at you. In addition, the droids it sends will also create laser blocking projectiles when destroyed. Keep sending missiles to the center to reveal the base underneath. It will now begin to fire homing shots at you as you hit the base with more missiles. When the base takes enough damage, it will explode, and you will proceed on. The second time you face this base in Stage 12 will be identical to the first time. After defeating it twice, the arcade version will end.