Spoilers have been deliberately excluded from mention.

As mentioned previously, only two nations appear in this installment of Ace Combat. They are as follows:

The Independent States Allied Forces (ISAF) is the nation the player character is based in, and is the protagonist nation of the game. The ISAF air force is composed of several fourth-generation aircraft, such as the R-M01, Mirage, F-16, and the F-15C and E. The Mobius squadron canonically flies the F-22.

Although the game focuses on air combat, ISAF has a formidable navy and ground force as well. The ISAF army uses M1 Abrams MBTs for ground combat and the AAV-7A1 for amphibious landings, while the navy employs Ticonderoga-class missile cruisers, Hatakaze-class destroyers, and a Kitty Hawk-class carrier which serves as the base of the Mobius squadron in open seas.

The Federal Republic of Erusia, also known simply as "Erusia", is the antagonist of the game. Erusia's capital is Farbanti.

Having been struck hard by the Ulysses 1994XF04 asteroid, Erusia turns to its anti-asteroid defence and turns it into an anti-aircraft weapon, pushing ISAF off of the mainland to a small island known as North Point. Guarded by the 156th "Aquila" Tactical Fighter Wing - also known as the Yellow Squadron - Erusia rules the skies over the mainland. Erusia flies similar aircraft to ISAF, but is known to employ several later-generation aircraft later in the game, such as the Typhoon, the Su-47 Berkut, and the F-15 ACTIVE. Although some Erusian pilots fly the F-22, Erusia's trademark aircraft is the Su-37 Flanker-F, made famous by the Yellow Squadron.

The Erusian navy, however, is far beyond ISAF's capabilities. Most of the Erusian navy is focused in the Aegir Fleet, based out of Comberth Harbour, and is considered by many to be "invincible". The Aegir fleet employs an Iowa-class Battleship, the Tanager, and the Kitty Hawk-class carrier Geofon, as their flagships. They are supplemented by the Ticonderoga-class Raven, Hatakaze-classes Kolga, Lazuli, Fenris, and Beluga. These in turn are escorted by Cassard-class destroyers Herne, Thiassi, andTaisch. For covert operations the Aegir fleet employs the Los Angeles-class submarines Beowulf π and ν.

Ace Combat is set apart from other flight simulators for its vast variety of memorable (sometimes notorious) characters.

Very little is known about Mobius 1. He is the player character of Ace Combat and is known only by his callsign. He is based out of the Kitty Hawk-class carrier Fort Grace at the game's start, and is considered to be an aspiring fighter pilot.

He was a pilot who prided himself not on his kill record, but on his record of never losing a squadron member.

Yellow 13 is the leader of Erusia's famous Yellow Squadron, the defenders of Stonehenge. He is known to have 64 kills, but longs for a worthy adversary. Bound by a sense of honour and chivalry, he yearns to fight challenging pilots. "But when there were no such enemies to look forward to," the narrator notes, "Thirteen's eyes were sad.". He looks down upon sabotage, which he considers "cowardly".

It is strongly hinted on ACES WEB (the Ace Combat Japanese site) that Yellow 13's real name is David Jordan, but nothing is confirmed.

His wingmate, Yellow 4, is the only female member of the squadron. Hand-picked at a young age by Yellow 13, the narrator describes her as "gentle", but could tell she "would never let danger near Yellow 13, even on land." 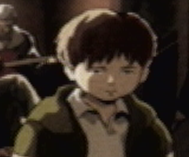 A young boy, aged approximately 16, is caught in the midst of the war from his hometown of San Salvacion. His name remains unknown. At the very beginning of the game, he remarks how "war was an abstract idea, nothing more than a show on TV". One day, however, he sees a dogfight between the Yellow Squadron and ISAF. Yellow 13, chasing an ISAF aircraft, shoots down a plane that crashes into the narrator's house, killing his entire family.

He then moves in with his uncle, in the city. There he earns tips by playing his harmonica at the town bar. It is there that he meets Yellow 13 and the rest of the Yellow Squadron, and befriends them.

The story is told as a series of reflections through the narrator.

Stonehenge is a battery of eight massive railguns with equally massive range. Originally built to shoot down asteroids, Stonehenge was modified to be an anti-aircraft platform when the asteroid threat passed, and Erusia suffered considerable damage. Used essentially as a giant flak cannon, the shockwaves from Stonehenge can be felt across an entire battlefield, eliminating any aircraft to be caught in the blast. When ISAF attacked Stonehenge directly, they were faced with Yellow Squadron, making Stonehenge nigh untouchable from the air and land. It is due to Stonehenge that war erupted.

Spoiler
Built to replace Stonehenge, Megalith is a rocket launching facility designed to destroy asteroid fragments in orbit. Its range is practically global, reaching as far as North Point from its position on the other side of the continent. It is also guarded by the Yellow Squadron, and is considerably more difficult to destroy.