From StrategyWiki, the video game walkthrough and strategy guide wiki
(Redirected from Aeroboto)
Jump to navigation Jump to search 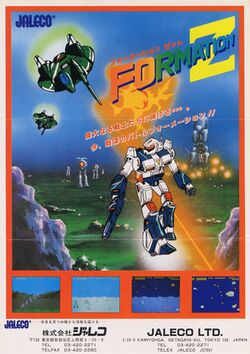 Formation Z (known as Aeroboto in the U.S.) is a shoot'em up game developed by Jaleco with a twist. The machine that you pilot starts out as a robot. By pressing and holding the jump button down, you will transform from a robot to a jet fighter plane (in a manner similar to the Robotech VF-1 Valkyrie). In this mode, you can travel extremely fast and cross bodies of water that the robot mode cannot. But you consume a supply of fuel, so you can't remain a jet forever unless you collect more fuel.

It was never released for home consoles outside of Japan. It was converted for play on the Famicom where it retained most of the features found in the arcade. A graphically limited conversion was also produced for the MSX home computer. The game was later contained in Jaleco Collection Vol. 1 for the PlayStation in 2003, and in Jajamaru Jr Denshouki Jaleco Memorial for the Game Boy Advance in 2004. A faithfully emulated conversion was also released for Windows in 2004