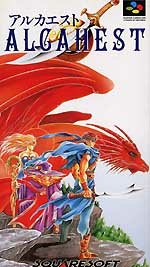 Alcahest (アルカエスト, Arukaesuto?) is an action RPG for the Super Famicom, developed by HAL Laboratory and published by Square (branded as Squaresoft). The game was released in 1993 in Japan, and has never been released in other markets. It is notable for being an RPG that uses a password system.

Alcahest uses a top-down perspective that plays similar to The Legend of Zelda. It is divided into 8 stages that are progressed by finding items that aid the protagonist Alen on his quest, and end with a boss battle. After specific boss fights, the player will gain the abilities of one of the four elemental Guardians. Alen will also find five allies that will join him at predetermined points of some levels. They are the young wizard Garstein, the princess Elikshil, the knight Sirius, the android Magna and the shape-shifter dragon goddess Nevis. Though they cannot be controlled directly, allies will attack and use special moves when the corresponding button is pressed.

In traditional RPG fashion, the player has stats, including vitality that decreases when attacked, MP (Mana Points) that is used to summon Guardians in battle, and SP (Special Points), which is required for a partner's special attack. At the end of each stage, Alen's health increases. The player is also able to attack the game's various enemies using a sword, which can also be charged for a special attack, different depending on the elemental Guardian selected. Items can also be found those that restore Alen's various stats.

Experience points can also be gained by defeating enemies and bosses, and serve to add continues. Because the game does not feature a battery backup, the player is given passwords at the beginning of each new stage.