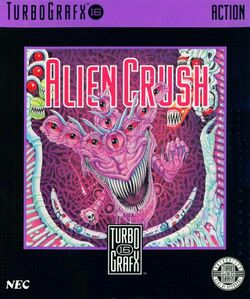 Alien Crush (エイリアンクラッシュ, Alien Crush?) is a pinball game developed by Compile and published by Naxat Soft for the PC Engine in Japan in 1988. It was later ported for play in North America and published for TurboGrafx-16 by Turbo Technologies the following year as a launch title. It was later re-released on the Virtual Console and on the PlayStation Network, published by Hudson Soft.

The game is the first installment in the "Crush Pinball" series. It was followed by three sequels, Devil's Crush, Jaki Crush, and Alien Crush Returns.

Alien Crush features a science fiction theme reminiscent of the film Alien. Essentially, the player is "fighting" against the aliens with their pinball skills.

The playfield of Alien Crush consists of two main screens arranged vertically, with a pair of flippers at the bottom of each. The play stops momentarily as the ball shifts from one screen to the next. There are also several hidden/bonus rooms. These hidden rooms mainly involve destroying all the aliens (or several waves of aliens) for bonus points.

The player is given the choice of a fast or slow ball speed and two different music tracks.

Before you begin a new game, there are two selections to make.

Speed Select - Fast / Slow
This is a bit of a mislabel. While choosing Slow does make the ball generally move slower, it doesn't stop the ball from moving as fast as it does when you choose Fast. Rather, it affects the perceived "tilt" of the pinball table. Choosing Fast will make it so the simulated table is at a steeper angle than it is on Slow, so the ball picks up speed faster.
Music Select - Lunar Eclipse / Demon's Undulate
This select has no effect on the gameplay, it simply allows you to select which background music plays through the majority of the game. Lunar Eclipse is more of a rock themed song while Demon's Undulate gives the game a spookier atmosphere. 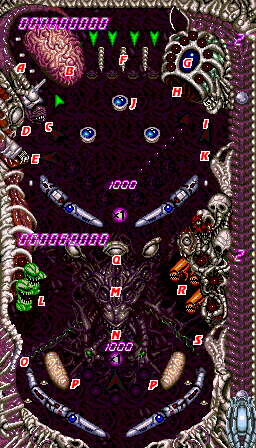 During play, you can only view the top half or the bottom half of the pinball table at any one time. The entire table is presented on the right. Each of the interesting positions around the table are indicated with a red letter, whose function or purpose is indicated in the table below.

Each new ball starts out in the lower right corner of the bottom half of the table, with the ball on the plunger. Press and hold either

to deploy the plunger. You are not required to hold it down until the plunger is fully pulled back, but the further it is pulled back, the faster it will rise to the top. Once released, the ball will travel up the lane along the right and into the top half of the playfield.

Points are awarded for hitting various targets throughout the table. Additionally, many targets contribute to a bonus point pool which is awarded whenever a ball is lost. Some targets even increase the multiplier which gets applied to the bonus point pool. Along with the targets on the table, certain conditions can cause portals to open up which transport the ball to a bonus stage. There are four different bonus stages altogether, described below.

There are four Bonus stages, each with their own objective. 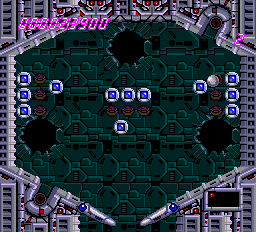 Bonus stage 1
This bonus stage is accessible by hitting the ball into the open mouth next to the Tentacloid monster on the right side of the top half of the table when the arrow pointing to it is yellow. In this bonus stage, there are a set of bumpers. Most of them are stationary, but some of them move. Next to or below some of the bumpers are three sets of three lights that engage whenever the ball passes over them. The objective is to light up all nine lights. Upon doing so, you will receive a bonus for every red and green light that appears. Red lights are worth more than green. 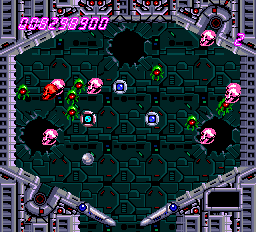 Bonus stage 2
This bonus stage is accessible by hitting the ball into the open mouth of the alien in the center of the bottom half of the table when the arrow pointing to it is yellow. This bonus stage contains a large number of aliens and skulls. They bounce around the screen. Any time the ball hits one of them, they turn red for a brief period of time. If they happen to move over one of the holes in the background while they are red, they will fall in and are removed from the table. You will earn bonus points for every skull and alien that you manage to knock into the holes. 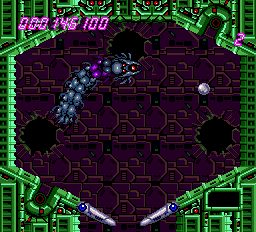 Bonus stage 3
This bonus stage is accessible by hitting the ball into the open mouth above the eyeball on the left side of the top half of the table when the arrow pointing to it is yellow. During this bonus stage, a centipede-like alien escapes from one of the holes and marches around the screen. Whenever you hit the head or a segment, it changes color. If you manage to break through the center of the centipede, all of its segments scatter from its body. The head will still move around and may occasionally duck into a hole, only to reappear moments later. When all of the segments and the head are destroyed, another centipede will appear. Bonus points are awarded for every head and segment that you destroy before the ball is lost. 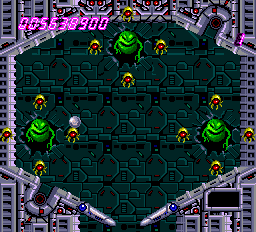 In an unusual twist for a pinball game, Alien Crush actually has an ending. It's incredibly short, and you need to score 999,999,990 points in order to view it. However, based on average gameplay, it would take approximately ten hours to reach this score. The video presented to the right demonstrates what happens when you accomplish this feat.