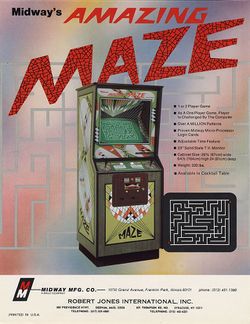 Amazing Maze, referred to as The Amazing Maze Game on the title screen, is an arcade game that was released by Midway Games (in 1976); it utilizes the Intel 8080 microprocessor running at 1.9968 MHz and is one of the earliest maze games produced. Both players must use a 4-way joystick to take control of a small symbol (a diamond for 1P and a square for 2P, but if only one player is present, the square is controlled by the CPU), through a complex maze - and because they'll start out on opposite sides of the maze, they must race to get to where their opponent had started from first. As with many other early Midway games, the gameplay is time-based as opposed to life-based and you'll receive a single point for each maze you clear faster than your opponent (or the CPU); there are over a million different mazes in the game, and they'll change with every point scored but never repeat themselves.