Ancient Glory is an action-adventure game developed by Logical Design Works and published by Big Red Computer Club and California Dreams exclusively for the Apple IIGS. The actual release date for this game is probably unverifiable, but based on the game's copyright dates the game was probably completed in 1992, and later released around the world at different times in 1993. 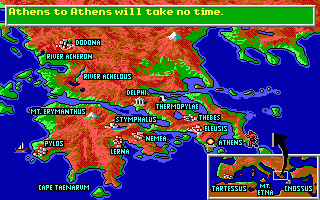 Hercules must help restore order to the land by helping Athena conquer Hera's forces. Your quest is to travel around ancient Greece and return the head of Medusa to Athena before the end of several days.