Aztec Challenge is a Commodore 64 game developed by Cosmi Corporation in 1983. It shares the same name of the game published the previous year for the Atari 8-bit, but is instead a collection of levels posing separate challenges.

Aztec Challenge consists of 7 levels concerning a single challenge. When all seven levels are completed, the game loops for up to 4 phases, each increasing the difficulty. Losing a life requires you to restart the section from the beginning, while losing five lives returns to the stage screen (which serves only to alternate the active player). 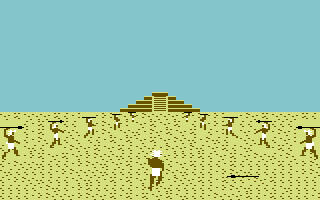 The first stage involves running toward the temple. There are two controls, where pushing up jumps, while pulling the joystick down causes the runner to duck. The objective is to survive for 80 seconds, where getting struck by a spear (or ducking for too long) causes death. 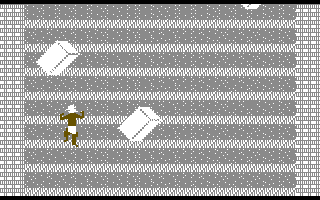 The second stage is a auto-scrolled stair-climbing sequence. The only control is moving left or right, and you need to avoid the falling rocks. You need to last approximately 75 seconds. 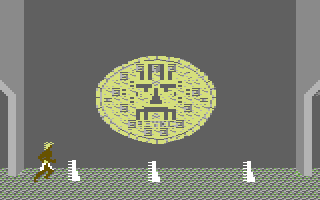 The third stage requires moving through trap-filled rooms. Two controls - pushing the joystick left stops, and to the right for a jump.

In general, you should either pause or jump soon after entering the room, preferably after the door. This allows you to identify if you're in a pit room, as the pits generally appear when you're practically on top of them.

There are three trap types:

You only need to run through nine rooms on the first phase. Later phases increase the number of rooms, up to 54 rooms. 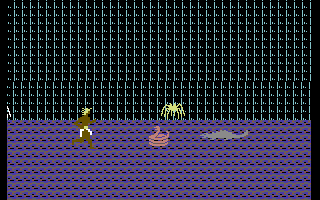 An autoscroller level, where you need to dodge vermin and other critters that appear in the way. You need to survive 80 seconds in the corridor to advance to the next stage. Two controls, down for a low jump and up for a high jump.

Although it uses sprite contact for collision, it seems tolerant as if you need a few frames of contact before it registers a death.

Higher phases increase the density of the vermin, although each critter only appears once on the screen. 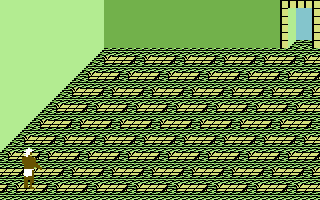 This is a maze level, where you have to jump from tile to tile. The catch is that some of the tiles are randomly booby trapped, and you need to reach the exit within five lives while remembering which tiles are trapped. If you lose all lives, you have to restart the level with a new layout.

Later phases increase the number of trapped tiles. Note that the game makes no consideration on whether or not a given trap placement is winnable, thus the fourth phase will have a large number of retries due to the luck-based nature of the level. 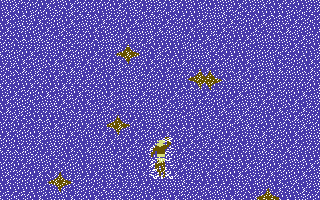 An evasion level, where you need to advance while evading the piranhas. You can move in any direction, and can hold the fire button (for up to one second) to avoid the piranhas by diving. You will need to move to the top of the screen about 17 times to complete the level.

Although there's sprite contact, there may be a glitch where the piranhas attack regardless. 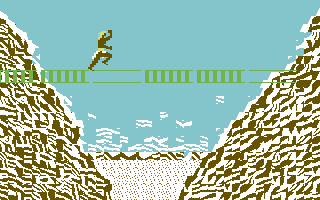 An autoscroller where you need to jump across gaps in the bridge. Down for a low jump, Left for a medium jump and up for a high jump.

The bridge holes are 1, 2 and 3 tiles, which is respective of the type of jump you need. You will need to survive for about 2 minutes.

Later phases adjust the speed of the bridge, where you may have to do a medium jump for a single hole gap, and also require pixel-perfect timing.

Completing all four phases ends the game, cycling back to the title screen.