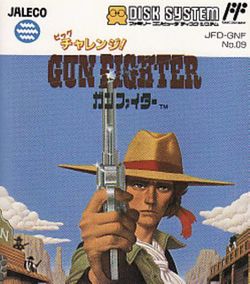 Big Challenge! Gun Fighter is the third in Jaleco's Big Challenge! series of Famicom Disk System games. The player is a cowboy who must make their way across a Wild West town while shooting or avoiding the various enemies, which include rooftop gunmen, boxers and other ne'er-do-wells. The player can find additional ammo and health refills after defeating enemies, as well as money which can be spent at the start of each level on various items.

You must run through 6 levels and kill enemies with four different weapons. At the end of each level, you challenge a boss character to a duel. To reach the boss, first you have to kill enough enemies so that the counter in the lower-right corner of the screen reaches zero. At that point, when you reach the exit on the far right side of the level, you will challenge the boss.