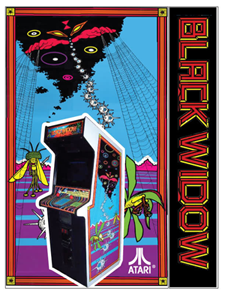 Black Widow is a multi-directional shooter arcade game that was released by Atari in 1982; it utilizes two Motorola M6502 microprocessors (running up at 1.512 MHz), with two Pokey chips running at the same speed for sound. The player must use two eight-directional joysticks (one for moving, the other for firing) to direct a spider (who is the eponymous "Black Widow" even though she is coloured green in the attract sequence, and red in the game itself) around a web, defending it against various enemy insects such as mosquitos, beetles, hornets, spoilers, grenade bugs, rocket bugs, and thunderbugs - and even though Taito America Corporation had released an arcade game entitled "Black Widow" in the previous year, Atari bought the rights to the name, forcing Taito to cease production of their own.