Blackjack was one of the nine Atari 2600 titles that launched with the system in 1977. Blackjack is obviously a video version of the real-world card game with the same name. One to three players compete against a computer dealer in an attempt to get the closest to 21 without busting. Each player starts with 200 dollars and strives to break the bank by reaching 1,000.

While playing Blackjack at home wasn't a novel idea, playing against a computer was. Even though Atari was marketing to the younger generation who enjoyed playing action-intense games at the arcade, it was also trying to appeal to adults who had never been formally introduced to a computer before by providing familiar, and easy to understand games.

Blackjack used the paddle controller to allow up to three players to play simultaneously. Players could also use the right difficulty switch to choose between two different set of rules, known as Casino rules and Private rules. A more unusual feature of the game was the ability to let a player temporarily remove themselves from the game, allowing the game to continue without them, and then being able to come back in at any time and pick up where they left off. 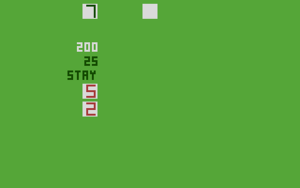 Blackjack is a fairly straightforward game, enjoyed by many casino patrons. All players play against the dealer, never each other, using one single deck of cards. The goal is to get as close to 21 points without going over 21. Each card is worth a different number of points.

All number cards are worth the number of points printed on the card.

All face cards are worth exactly 10 points.

The Ace card is special. It can be worth either 1 point or 11 points.

Play begins by placing your bets. You must choose to bet between 1 and 25 dollars. You are doing so blindly, because you must bet before you see any of the cards in your hand or the dealer's. So bet as much as you are willing to lose. Once every player locks in their bets, the dealer begins to deal the cards, two cards for every player (face up) and two cards for himself, one face up and the other face down. At this point, each player must choose one of three commands:

Play continues for each player until they either lose all of their money, or break the bank (reach $1,000). If either event occurs, a player may start over at any time with a new bank roll of $200.