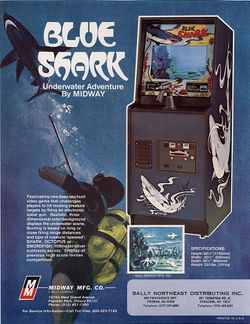 Blue Shark is a first-person shooter arcade game that was released by Midway Games in 1978 and, much like Guided Missile, licensed to Taito Corporation for Japanese manufacture and distribution; it utilizes an Intel 8080 microprocessor (running at 1.9968 MHz) and the player must take up a speargun (which uses a potentiometer to send a signal to the PCB, not a lightgun)with a trigger to fire shots at three types of sea creatures (sharks, swordfish and octopuses) for points (but if you hit a skindiver, it will result in loss of points, which is a rarity in arcade games). Much like several other early Midway games the gameplay is time-based as opposed to life-based, and it'll be extended if you manage to reach a certain amount of points before that timer has run out - and this game may also be seen as a forerunner to Namco's Bubble Trouble.