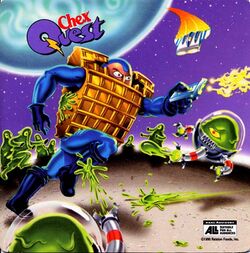 Chex Quest is a non-violent first-person shooter video game created in 1996 by Digital Café as a Chex cereal promotion aimed at children aged 6–9 and up. It is a total conversion of the more violent video game Doom (specifically The Ultimate Doom version of the game). Chex Quest won both the Golden EFFIE Award for Advertising Effectiveness in 1996 and the Golden Reggie Award for Promotional Achievement in 1998, and it is known today for having been the first video game ever to be included in cereal boxes as a prize. The game's cult following has been remarked upon by the press as being composed of unusually devoted fans of this advertising vehicle from a bygone age.

Set on a distant planet named Bazoik, the game follows the Chex Warrior, a human soldier clad in a Chex-shaped suit of armor, as he eradicates the invasion of the planet by the 'Flemoids': a species of slimy, green invertebrates, who have infested the planet and captured many helpless human colonists, whom the Chex Warrior must save. His main weapons are devices called "zorchers", which teleports his enemies to their home dimension. The game starts at the landing pad of the research center on Bazoik; other levels include the laboratory, the arboretum, and finally, the underground caverns of Bazoik, where the Flemoids have established their colony. Their principal weapon against him, is the use of mucus as a projectile.