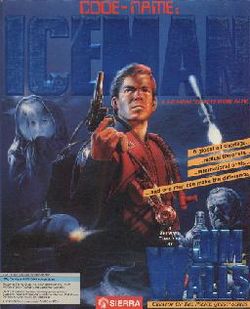 Codename: ICEMAN is a graphical adventure game made with the SCI engine and published by the American computer game company Sierra On-Line in 1989. The lead designer was Jim Walls, who also created several Police Quest games.[1] Mention of a "Codename: PHOENIX" in Sierra promotional material suggests that ICEMAN was meant to be the first part of a Codename series, but disappointing sales ended the would-be franchise after one game. One of ICEMAN's most notable features is that a large portion of it takes place in a submarine; a portion of the game also requires the player to navigate the sub using an extremely scaled-down model. Much of the story (which features Cold War and Soviet villains) is outdated in hindsight, the scenario is partially prophetic of the 2000s energy crisis which began in 2003.

The story takes place during a future global oil shortage, Tunisia is suddenly discovered to possess a surplus of high-grade oil. While the Soviet and American governments try to acquire as much of the oil as they can, Soviet-backed terrorists kidnap a US ambassador in hopes of provoking an international incident. Naval Officer Johnny Westland is informed about the situation during his leave in Tahiti and is called back for the rescue mission. The night before returning to duty, he has a one-night stand with Stacy, a mysterious beautiful woman. In the Pentagon, Westland is briefed and learns that Stacy is also an agent whom he must meet as soon as he reaches his goal. To reach his target, Westland travels in a nuclear-powered submarine, the USS Blackhawk. After fighting with Soviet vessels, navigating his way through an iceberg field and repairing some malfunctioning devices, he must penetrate the electronic harbor surveillance of Tunisia. A diving vehicle must be maneuvered through sensitive magnetic fields without being detected. Finally Westland meets Stacy on the shores of Tunisia. Working together, the agents free the ambassador; Westland is promoted and proposes to Stacy.