From StrategyWiki, the video game walkthrough and strategy guide wiki
(Redirected from Cosmo Genesis)
Jump to navigation Jump to search 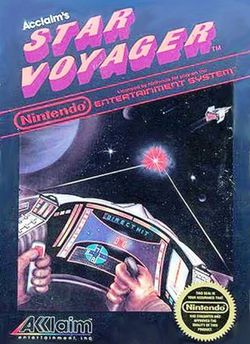 Star Voyager is an outer space shooter for the NES. It was originally developed in Japan by ASCII Entertainment, and released as Cosmo Genesis at the very end of 1986. Acclaim picked up the rights to release the game in the United States and changed the title.

The gameplay is heavily based on Atari's original Star Raiders concept. Another Famicom game built on this concept is Namco's Star Luster, which many players regard as the better quality game out of the two. Star Voyager is a first-person shooter from inside the cockpit of a spaceship. The player navigates through different quadrants contained in a galactic map. Different sections of the ship can sustain damage, but this damage can be repaired by visiting a space station.

The game is considered extremely difficult and frustrating by some, requiring a great deal of practice and strategy to overcome the sheer firepower that the enemy is capable of throwing at you. Star Voyager is one of those games where using a Game Genie to cheat can't always help you beat the game.

The Problem: A flotilla of Molok Wardrivers are holding your temporary home, CosmoStation Noah, captive.

You and your people never wanted any trouble. You had boarded CosmoStation Noah in an attempt to flee a Galaxy whose sun was quickly dying.

Your hope was to find a new home. In a Galaxy whose sun was young and strong.

But suddenly - as you entered Spiral Galaxy IX - all hope began to dwindle. For you were confronted with one of the most ruthless astral terrorist groups in the universe: the Molok Wardrivers.

The Molok Wardrivers are renowned for their total disrespect for anything but rampant destruction. And they need no provocation to be driven into action.

Fortunately, the planners of CosmoStation Noah had thought to include the RH 119 in their inventory of equipment.

The RH 119 is one of the most supra-tech space vehicles ever designed. And it's equipped with Laser Cannons, Barrier Shields, a Life Support System and Adam, a fully-integrated bio-computer.

The thing is, there were only a handful of CosmoStation Noah inhabitants trained to work with Adam. And one of them was you.

After a series of stringent tests - for reflexes, endurance, intelligence and physical and psychological strength - you were chosen from all the rest.

And now it is your job to leave the CosmoStation and go meet the enemy. All hope rides in your hands.

It's from the main screen that you'll monitor your energy and life support systems. It's also where you'll do all your flying. And fighting.

Use of the subscreen is vital to your efforts to battle the Molok Wardrivers, and defend the planets and bases. You can also determine the extent of damage you have taken in battle.

On 2 random planets, there are 2 upgrades to find that will aid you during the game:

The player's primary goal is to eliminate all enemy fleets before they can surround the stationary CosmoStation Noah. The player may also visit up to eight different planets in search of engine and weapon upgrades for their ship. Players may also seek repairs at up to five space stations in addition to CosmoStation Noah. The player may also visit an asteroid field, and a black hole from which escape is impossible. The game is won if the player defeats the enemy armada. However, the game is lost if the enemy fleet reaches the CosmoStation Noah, the player enters the black hole, the player's ship runs out of fuel crystals, or if life support fails.

Gameplay occurs on a 10x10 grid that is randomized at the start of each game with the exceptions of the player and CosmoStation Noah will always begin in the top left, and the five initial Molok Wardriver fleets will begin in the bottom right. To progress through the grid, the player must select their destination coordinates either through the HUD or the select menu grid, and hold down the B button to charge enough power to travel as many sectors as required to reach their destination, as identified by the number on the bottom-center of the HUD. The number of leaps charged is indicated by icons in the upper-left gauge.

As gameplay progresses, additional fleets may join the Molok Wardriver armada. Any planets or space stations they encounter during their trek to the CosmoStation Noah can be attacked. Plan attacks near space stations for easy repairs, but be warned: enemy armadas left only partially destroyed will regenerate when the player returns. In order to destroy the enemy fleets, the player must warp to their coordinates and destroy the fleet's spacecraft and mothership, which will endlessly deploy enemy spacecraft as long as it remains operational. The player must raise their shields in the select menu in order to minimize damage taken to the ship.

The player's fuel crystals will deplete normally over time, and faster during warping or sustaining damage. Therefore it is necessary to visit space stations to refuel to prolong gameplay. They can also repair damaged systems which include radar, engines, weapons, and life support. Depending on the amount of damage taken, the engines may become inoperable, one or both laser cannons can malfunction, and radar can become difficult to use.

In addition to the upgraded engines and lasers, there is another item that you can collect, called the Star Bomb. Its location is not indicated on the map.If you fly into the sector where the Star Bomb is hidden, you will receive as message from Adam saying "Faint Message Received." You must search within the sector until you find a thin vertical line. Dock with the line just like you would with a base. It will increase in size and appear as a black monolith, and you will get the one and only Star Bomb in the game. To activate the bomb, you must have a second controller plugged into your console. Press one of the buttons on the second controller to fire the bomb. It is best used against an enemy mothership and not against any of the smaller fighter craft.
Finding the bomb can be time consuming, and may allow your enemies to attack a base or planet while you are busy searching. It is not recommended that you actively seek it out, but rather happen upon it by chance in the course of your game.
Special Note: Method for finding the StarBomb.
The play area contains stationary and moving objects. The StarBomb is a stationary object, furthermore it is never occupied by a planet or the enemy. While playing the game you can track which sectors are never occupied by the enemy or planets to help limit your search.