From StrategyWiki, the video game walkthrough and strategy guide wiki
(Redirected from Cruisin)
Jump to navigation Jump to search

City Connection is a driving action game by Jaleco that was released in the arcades in 1985. In many ways, it can be considered a mix between Rally-X and Miner 2049er. In the game, you must drive a car over every inch of the stage. The roads start out clear, and as you drive over each section, they change color. On each stage, you must avoid a collection of local vehicles out to stop your joyride, and cats which sit in the middle of the road with no concern for their own well being.

Jaleco brought the game to homes on the MSX home computers where scrolling was replaced with screen swaps, and more faithfully on the Famicom and NES systems. In 2004, the game was rereleased on the Windows platform, not once, but twice, and contains the most accurate conversion made. It was included as one of five Famicom games in Jajamaru Jr Denshouki Jaleco Memorial for the Game Boy Advance. It has also been released as a title for play on Mobile phones.

This is your car, a Honda City hatchback. It's your job to drive over every segment of the road found in each stage. In order to do this, you must jump and fall between various levels of road. Your car cannot stop moving, only change direction. You must also avoid colliding into any other vehicle on the screen, as well as stationary cats that sit in the middle of the road. In order to protect yourself, you can fire cans found on the road at the other vehicles, which sends the spinning. You can then ram the spinning cars for bonus points.

The enemy cars take a variety of forms depending on the city you are in, including police cars, ambulances, pickup trucks, and taxis. They typically occur in groups of four or five. They typically appear ahead of you on the screen, driving along in your direction. They drive slightly slower than you, making collision with them from behind more common than collision with them from the front. They are susceptible to the tin cans that your car can shoot. If one spinning car is rammed into another spinning car, even more bonus points are awarded.

In every city, you will encounter cats which unwittingly serve as obstacles in the road. They remain motionless, and actually pose more of a threat to your car than the enemy cars since you will drive towards them quicker, and must react faster in order to avoid them. Like many items found in each stage, their position is not persistent. Once they scroll of the screen, they will reappear in another location of the stage, and not necessarily where you previously saw them. They can not be removed from the stage by shooting a can at them, so just avoid them and save your cans for the vehicles. Spikes will appear if you continue to drive on the same level for a long time. If you do not leave a particular level, spikes will appear from out of the ground, and they are extremely difficult to avoid. 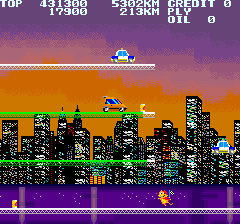 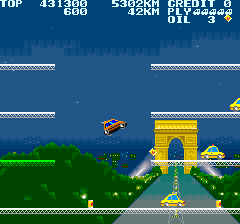 These are some pictures of the various home conversions and packaging.