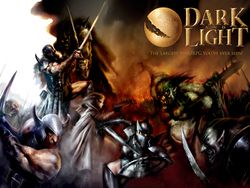 Dark and Light is a MMOG which is currently in pre-release.

Launched on December 12, 2005, Settlers of Ganareth (SOG) is the current pre-release incarnation of the Dark and Light MMORPG. It is currently at build version 0.88.92, and is constantly being updated with new patches. The SOG Live web page shows all of the latest information that has been officially released about the game.