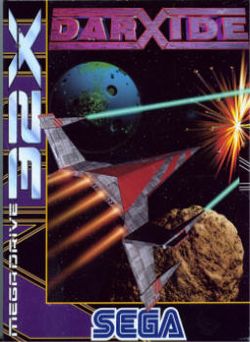 Darxide is a Europe-only 32X title. It was originally called Dark Side, but the name was changed at the last minute for copyright reasons.

Darxide is like a 3D version of Asteroids with some elements from Defender. The player fights enemy ships while rescuing miners and destroying asteroids before they crash into the planet. Darxide is one of only three released 32X titles (along with Doom and Metal Head) to use texture-mapped 3D graphics, and it features both cockpit and third-person views. Darxide was the last 32X game ever released, and was produced in very limited numbers.