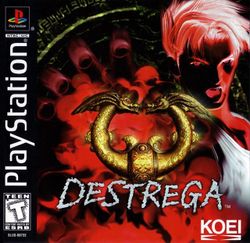 Destrega (デストレーガ, Destrega?) is a 3D fighting game created by Koei in 1998 for the PlayStation. Destrega separates itself from other games by creating a "Rock, Paper, Scissors" type of fighting system. When timed right, you can cancel or overpower your opponent's attack. The game uses two types of fighting styles: close-up hand-to-hand attacks and Relic attacks, which are the long-range projectile attacks. You can also fight in the air, on the ground, and on top of structures.

1000 years ago, the Strega appeared in the small country of Zamuel. These Strega possessed mysterious powers, and passed their knowledge to the people of Zamuel, transforming the poor country into a prosperous nation. They bestowed upon them mystical objects, known as Jeno, which would enable ordinary humans to exercise powers to their own. However, the Strega underestimated the overwhelming drive of human ambition and greed. With this new power, the people of Zamuel would invade their neighboring lands. In no time, the entire continent transformed itself into a world of destruction and death.

Through the millennium, the continent struggled to return to the golden age of prosperity it enjoyed before the Jeno War. Then one day the objects (now called Relics) were discovered in the Empire of Ipsen. After learning that these objects could allow a person to wield great power, the Emperor ordered Lord Zauber to restore them. News of the revival reached the descendants of Strega, and they pleaded with the Emperor to suppress the Relics. The Emperor responded by declaring war on the Strega. In the ensuing battle, most of the Imperial family, a great number of the high-ranking ministers, and many Strega were killed. Almost immediately, the other lords began vying for power, but the contest was a short one. Using the power of the relics, Zauber easily crushed the opposition. Having seized control, he appointed himself Prime Minister and began eliminating anyone who posed a potential threat. Fearing that the Strega would try once again to seal off the power of the Relics, Zauber began to systematically hunt down any survivors...