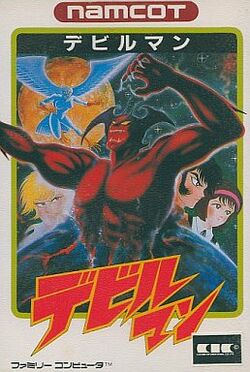 Devilman is a game developed by ISCO and plublished in Japan by Namco in 1989. It is a brawler/adventure game based on the manga of the same name. In it a young man with a pure heart by the name of Akira Fudo becomes possessed by a powerful demon named Amon, but is able to overcome the possession and retain all of Amon's considerable strength. In his new form, as Devilman, he is able to fight off other demons vying for control of the world while protecting his love interest Miki. In the manga this eventually leads to Akira fighting his best friend during the apocalypse. In the game this is the worst ending, while saving Akira's adoptive family during each level will lead to a better ending.

In the game, the player controls Akira in his human form until he is able to find a way to become Devilman and fight off the enemies, which remain invincible in his human mode. Akira can enter houses and talk to their occupants for hints and advice. By following a specific series of actions, the player will discover the Devilman form and the game becomes much more action-orientated, including one sequence where Devilman grows into a colossal form to fight other gargantuan demons. The game was only released in Japan, and has never been translated into English.