Having two or more Pookas on your tail can present you with a problem: if you try to explode one Pooka, the next one in line will pass right through his inflated friend and kill you. The problem is that your pump line remains hooked to the first Pooka, and the other Pooka is not affected by your pumping. The solution is to turn away from the first Pooka, breaking the connection, and instantly turn back and start pumping again. Your renewed pumping action will affect the closest Pooka. Meanwhile, the other Pooka will be immobile, until he has completely deflated. Repeating this process one or more times may keep Dig Dug safer while defeating the enemies, but you should not rely on this too much on the later rounds. 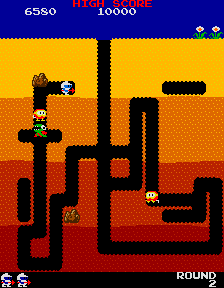 The rocks are a great asset, once you understand how to use them. Some important observations about the fine art of rock-dropping follow:

Be greedy near the end[edit] 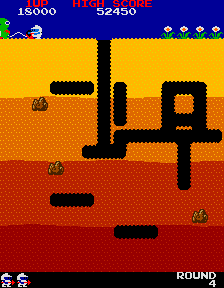 When time is running out, and the last Pooka or Fygar heads for the surface, you should grab whatever points you can. This may mean eating the vegetable bonus, or waiting on the surface for the fleeing enemy. If you are too far from the surface to get there in time, just keep burrowing and score a few extra "dirt points". These free points can make a difference - because the next time your game ends ten points short of an extra life, you will probably wish you had been more greedy, especially if the arcade operator disabled the continue feature, and you cannot try again.

Unlike almost any other maze game, Dig Dug provides you with a way out of the seemingly hopeless predicament of being stuck between two approaching enemies. One possibility of course is to simply burrow away to the side. But if there is not enough time for that, or you are stuck against a rock or the edge of the screen, you can still escape; just go through one of them. Hit an enemy up to three times with the pump button, and you can pass through him, as long as you do it before he deflates. This trick comes in handy very often - do not forget it.

To beat any round of Dig Dug, one must take advantage of the artificial intelligence. One way to do this is to dig out either left or right from the starting position, dig up a short way from your starting position, turn around and continue digging out your initial tunnel, then go up again (this time further away from your start position) until you are higher than the end of your first vertical tunnel. Continue from here in the opposite direction of the direction you went at the beginning of the level, until you have almost reached the vertical tunnel that exists before you start any given level of the game. Create a thin wall between you and the vertical tunnel, and pump the enemies up as they pass by - but watch out, as the Fygars can still burn you.