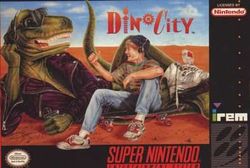 DinoCity is a Platform game for Super Nintendo, produced by Irem and released in 1992. The basis for the story and characters of the game come from the 1992 direct-to-video film Adventures in Dinosaur City.

The game centers around the adventures of two human children, Timmy and Jamie, and their dinosaur pals, Rex and Tops. When Timmy accidentally activated his dad's time machine, he and Jamie got transported to the prehistoric age. A crucial part of the time machine was stolen by the "Rockies" Gang, so the team must take on the gang (as well as several boss guardians) and retrieve the stolen fuse, so they can return to their own time.

Players can choose to control either pair of characters, Rex and Timmy or Tops and Jamie; each offering slightly different abilities.