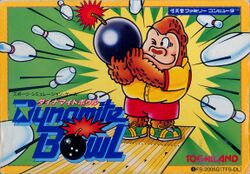 Dynamite Bowl is a bowling game for the NES where you can choose between five different players and 30 different lanes. The game is played and scored just like real bowling. 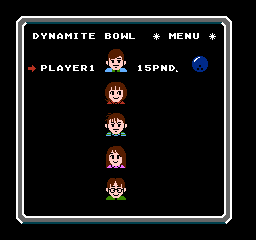 Above the lane is a small picture of the player's position. Use

to move into position. The Control gauge will move left and right. Press 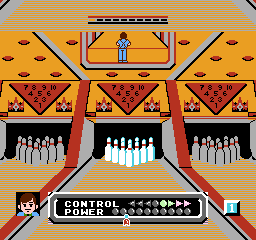 An alley from the game.

In Game A, each frame provides you with two chances/throws to knock down all ten pins, and the game is scored like traditional bowling. If you knock down 4 pins on your first attempt and 2 more on the second, you would get a score of 6 for that frame.

If you knock all pins down in one go (strike), the score will be totaled based on the score in the next frame. For example, if you hit a strike on the first frame and a four and two on the second frame, it would be a score of 22:

The score of a strike is not recorded straight away and instead marked as an X. Hitting three strikes in a row (turkey) would give the first frame 30 points.

Hitting a spare, by knocking down the remaining pins with the second chance, results in a bonus of the next ball. For example, hitting a spare followed by a four and two means a score of 20:

The final (10th) frame is slightly different. You get a bonus ball if you have managed to get a strike or spare in the first two attempts, thus a third chance to score another strike or spare. The final frame's maximum score can therefore be 30 points as well, and if there are only strikes in all 10 frames is achieved a total of 300. 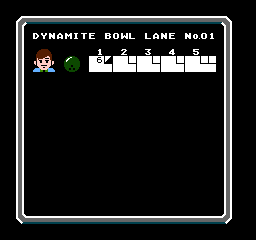 The mechanics are the same in Game B, but the scoring has changed. Once you have hit a strike, hitting any amount of pins will result in a score. From then onwards, a strike is 55 points and you need one to start the scoring. It is 55 points because each pin scores its value on the board. In other words pin No. 10 is worth 10 points, 9 is worth 9 points and so on. For example if you knock down pin number 5, 6 and 7 the score will be 18.

Your aim is to score exactly 500 in as few turns as possible. When your score is near 500, each round's points will be either added to or deducted from your total to give the score which is nearest to 500.