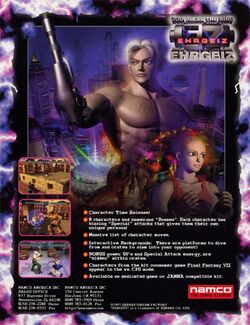 Ehrgeiz (エアガイツ, Eagaitsu?), fully titled as Ehrgeiz: God Bless The Ring, is a three-dimensional fighting arcade game that was developed by DreamFactory and Square for Namco in 1997; it runs on Namco's System 12 hardware, and was later ported to the Sony PlayStation by Square themselves in 1998, as well as the Japanese Sony PlayStation Network by Square Enix a decade after that in 2008.

Perhaps the most noteworthy feature of the game is the fact it features characters from Final Fantasy VII, as Cloud Strife, Tifa Lockhart and this title's own sub-final boss Django (who resembles Red XIII) are playable in both the original arcade and Sony PlayStation versions; furthermore, Sephiroth, Yuffie Kisaragi, Vincent Valentine, and Zack Fair were added to the lineup for the Sony PlayStation version.