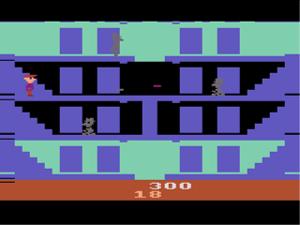 A prototype was developed by Atari, and nearly completed in 1983. Atari changed ownership and the project was scrapped shortly before it was completed. The game was officially released in small quantities at the 2001 Classic Gaming Expo. 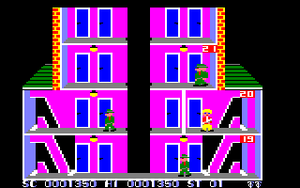 Released by Quicksilva in the United Kingdom in 1987.

Released by Quicksilva in 1986.

Released by Taito in 1991. This version contains a few departures from the arcade version. It added the feature to acquire different weapons, including a shotgun, a machine gun, and grenades. Due to the lack of color, doors containing documents are signified by an exclamation mark instead of a red door, while doors marked with question mark provide one random weapon. The small screen size requires you to move left and right to explore the more maze-like building. The game is generally easier. It added the health, allowed the player to cross elevator cables, and permitted a one floor drop without damage.

Elevator Action Old & New was developed by MediaKite and published by Taito in 2002. The original arcade conversion is contained in the game as the "old" Elevator Action, and is very accurate. The "new" Elevator Action contains a choice of characters to choose from that have different attributes, as well as updated graphics. 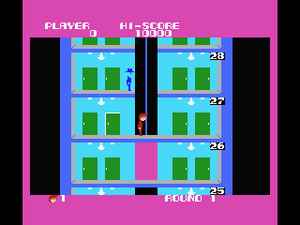 Released by Taito in 1985. Very accurate to the arcade. 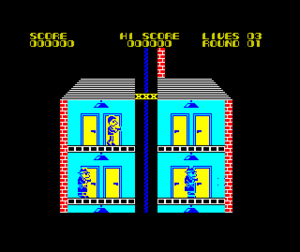 Released by Quicksilva in the United Kingdom in 1986.