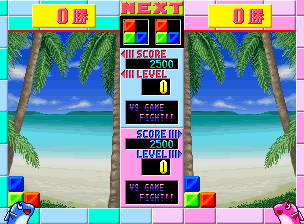 Once you've pushed your joystick to the right and pressed the Rotating Button to confirm that you want to play in Versus Mode, the game's two dolphin mascots, Minto (blue) and Gamu (pink), will jump up into view from the bottom of the screen, then disappear back down off it again as the text "FIGHT!" appears on both sides of it; game pieces will then start falling down on both sides of the screen, and whenever you crush a block, your dolphin will blow up a beach ball, then bounce it over to the other player's side of the screen (it will explode on impact). The text of "X BLOCKS COMING!" (X depending on how long the chain reaction was, which determines the beach ball's size), will now appear in the other player's display in the centre of the screen, as that number of Ojama Blocks come up into view, from the bottom of the screen; these cannot be cracked or shattered by any means, given that they do not make the game pieces that fall down from the top of the screen, even when lined up to do so. Much like Normal Mode, the edge of the "NEXT" box will fill up every time you crush a block - and once it is completely filled up to the top a Star will fall down from the top of the screen, and eliminate every block of one colour from the screen, when it lands. Once one player's side of the screen has filled up to the top, the Kanji/Hiragana text Kachī! (勝ちい!) will appear on the other player's side of the screen as their dolphin jumps into the air and begins bouncing on it, while the Kanji/Hiragana text Maketsu! (負けつ!) appears on their side of the screen, and their dolphin begins crying (the number to the left of the Kanji character shō at the top of the winner's side of the screen shall also get increased by one to indicate their victory); the Hiragana text of Tsuzukete yaru? (つづけてやる?) will now appear at the bottom of the screen and you'll have twenty seconds to insert another coin and press either Start Button if you want to continue. If you do not do this in time, the text "GAME OVER" will appear (above a shot of Minto and Gamu floating alongside each other then swimming off the left side of the screen), and it is also worth noting that although this game never got a sequel, it later went on to become the basis for the third world of Tinkle Pit later in 1993.