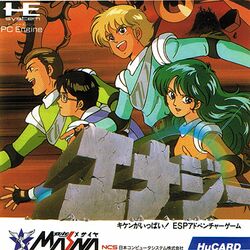 Energy (エナジー, Energy?) is a sci-fi side-scrolling adventure game developed by NCS for the PC Engine and published in Japan by Masaya in 1989. The goal is to save various people in a dilapidated city crawling with mutated monsters. Energy has aspects of open-world "Metroidvania" games. You will backtrack to various areas after new abilities are unlocked in order to make further progress where you were previously prevented from entering.

The game is based on a NEC PC-88 game from Quasar Soft named Ashe. Besides the big improvements to graphical and audio quality, the games seem functionally identical. Energy was widely regarded by critics at the time as being one of the worst PC Engine games. The game is plagued with coding issues (such as very slow transitions between screens) and the requirements to proceed are often inscrutable.

The game was never released outside of Japan. However, an English fan translation has been developed and is available here. In addition to translating the game into English, the patch attempts to improve more aggravating aspects of the game, including sped up text rendering, sped up screen transitions, and the ability to skip the introduction after the first time it's played.