Erika to Satoru no Yume Bouken

Erika to Satoru no Yume Bouken/Table of Contents 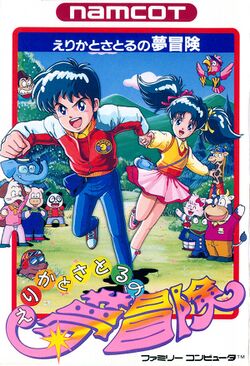 Erika to Satoru no Yume Bōken (えりかとさとるの夢冒険, Erika to Satoru no Yume Bōken? lit. "Erika and Satoru's Dream Adventure") is a 1988 Japan-exclusive adventure video game for the Famicom. It is a fairytale-inspired menu-driven adventure game. Players use the menu commands to interact with the world: moving around, looking around, picking up objects, talking to people, etc. The setting of this game is 20th century Japan.

In a novel twist, the two characters of Erika and Satoru (who are depicted as twin schoolchildren) are independently playable - either a single player switches between the two, or a second player takes over the second twin. Both characters need to be in the same region to converse with NPCs, but are otherwise free to explore the map autonomously. Two-player adventure games are very rare; even in Japan. However, only one person can partake in the animal quiz portion. Failing the quiz will force the player(s) to start from the beginning.

An odd bit of infamy related to this game is a secret developer's message that can be found if the player inputs a list of button presses after waiting some time after the game ends. Inside of which is a litany of compliments and complaints to other co-workers, including some sexual insults which are deeply at odds with the child-friendly nature of the game. It also refers to, among other things, the work Atlus did for LJN including The Karate Kid.

Erika and her brother Satoru are siblings who live together in a normal Japanese house. One night, a cat-like being gave them a mission to search for a powerful crown that will alter time and space for the person who possesses it. Players are forced to control both Erika and Satoru at the same time; causing them to interact with their surroundings at the same time. In-game activities that require two players include shoplifting and eliminating locusts.

Interacting with characters and doing their quests will bring players one step closer to retrieving the Time Crown; the item needed to win the game. Manipulating items will allow players to solve the quests. Teamwork becomes important as one character cannot solve certain tasks without the other being present. A player using the second controller can also control one of the characters; freeing up responsibilities from player using the main controller. When a player visits a landmark on the map, the view switches from a bird's eye view to a first-person perspective. A map is shown where the buildings and surroundings are; this is usually shown except for storyline sequences and when players need to interact with their surroundings.

There are five different chapters in the game. Once the player completes the third chapter, the difficulty level becomes drastically harder. Satoru has the weakness of being able to drown, unlike his sister Erika, who can swim in the water levels of the game. Players make use Erika and prevent Satoru from drowning.

Erika to Satoru no Yume Bouken/Table of Contents