Fighters Destiny (ファイティングカップ, Fighters Destiny? Fighting Cup in Japan) is a video game developed for the Nintendo 64 in 1998. The product of Imagineer and Genki, it closely models the 3D fighting game standard set by Virtua Fighter, but integrates a unique point scoring system. The game's generic characters and unoriginal presentation have been panned by critics, but reviewers praise its point system and consider it to be one of the best fighting games on the Nintendo 64. A sequel, Fighter Destiny 2, was released in 2000.

In Fighters Destiny, the player controls a polygon-based character in a three dimensional battle arena. The game features typical hand to hand combat fighting: using a variety of punches, kicks, locks, and throws, players attempt to pummel their opponents into submission. Each character also has a large list of special commands (called "moves") that can be accessed during battle. These different moves range from simply pressing 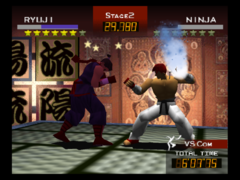 Ryuji draws back to strike Ninja, who is in Piyori condition

In most versus fighting games, the objective is to deplete the opponent's health gauge. Fighters Destiny follows the same concept but also relies on a customizable point scoring system to determine the winner. These points, which are displayed as yellow stars under the character's health gauge, can be earned in a variety of ways. Knocking the character off the fighting platform (a "Ring Out") is worth one point, taking down an opponent with a throw nets the player two points, while a typical K.O. is worth three points and executing a "special" is worth four. Finally, if the adjustable time counter runs out, then the winner is awarded one point by virtue of judge's decision. By default setting, the first fighter to score seven points wins the match.

K.O.'s can be achieved with instant-K.O. hits (referred to as "1-shot") or counterattack moves, or can be executed with a finishing blow when the player's opponent is in "Piyori condition," a brief spell of dizziness in which opponent's life bar has been drained completely and the fighter is allowed only limited control. "Specials" can only be executed when the opponent is in Piyori condition. If players are able to survive until Piyori condition passes, their health gauge refills completely. The health bar also refills continuously (albeit slowly) throughout the fight.

Fighters Destiny offers five different gameplay modes. By playing the traditional versus computer mode, players can earn a new character and learn new skills for their character. Other modes include player versus player, "Record Attack" in which players challenge their skills and gain new characters, "Master Challenge" which can expand their character's command list, and training which pits the player against a robot character. When players learn new skills playing the computer or the Master Challenge, they can save their character's expanded command list to the Controller Pak; afterwards, the new command list can be accessed in any mode to aid the player.