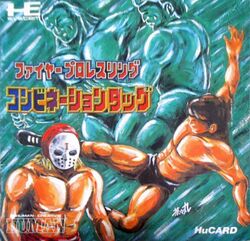 This game was initially inspired by Nintendo's Pro Wrestling game, and is an effort to improve upon the formula it establshed. The game design and program were lead by Masato Masuda, who worked on the above-mentioned Pro Wreslting. The gameplay emphasizes timing and precision over hammering the button in order to land attacks and finishers and to get out of holds and pins.

This title pioneered the presentation of the ring in an isometric view. Techniques are assigned to the "RUN" button, which is not often used in other games for anything other than pausing. The player can select from sixteen fictional wrestlers, who were based on real wrestlers of the era. The game featured singles, tag team and tournament matchup modes.