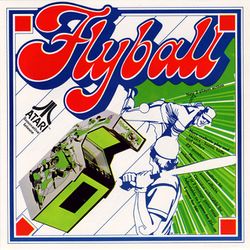 Flyball is a baseball arcade game which was released by Atari in 1976; it utilizes a Motorola M6502 (running at 756 KHz) and both teams only have one player (at least, the pitching team only features the pitcher, but up to four members of the batting team may be on their bases simultaneously). Both players must use an analogue joystick, 1P bats first and 2P pitches first, to control their players with one button to make them bat and pitch for the members of the batting team will run round the bases automatically - and unlike in real baseball matches, the game shall only last for one (or two) innings.