The levels of Gauntlet contain a variety of obstacles and items:

Exits do what you'd think: progress you to the next level. During the 7 introductory levels, a trio of Exits found throughout also indicate a number, which indicates the level you'll skip to.

Since the 100 levels past the first 7 loop endlessly, finishing the game is impossible. Scoring points is your only real goal, thus reaching the Exit is not "mandatory". However, your health will constantly drop, and it is necessary to reach the Exit to obtain more food to keep playing. Going to the next level will also give you more tools like Potions to aid in survival, as well as potentially better scoring opportunities.

Walls are what you'd expect. They get in your way, as well as the way of any enemies.

It should be noted that a pair of diagonally adjacent blocks can be fired through by most characters, as shown here:

Walls will become Exits if you remain still and undisturbed for about 180 seconds. 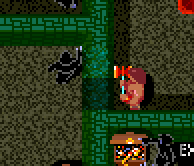 Some walls, denoted by their softer textures, can be destroyed by shots

Touching one of these will usually teleport you to the closest adjacent teleporter. If there are two within reach, you can end up at either one. You can land on any of the 8 tiles surrounding the teleporter by holding the joystick in that direction. It is rumored that the animation of a teleporter controls which destination you will travel to when you touch it (ex. if it is light, you will warp to a different teleporter than when it is dark). This has not been verified.

Doors can be any shape and size, and any door tiles touching will all unlock at once with a single key.

Having a key for a door can make progress a bit easier, but it isn't necessary. If you remain free of engagement in battle with monsters for 18 seconds (36 if you have keys), all doors in the level will be unlocked. The main strategic purpose of using a key on a door, instead of stalling them open, is for flood control. Doors often obstruct enemy hordes from coming after you, and opening the doors one at a time allows you to control how many enemies can attack you, and when.

The things that open the doors.

Be careful about picking up too many keys. They share the same 12 inventory spaces as potions, and can only be gotten rid of by using them on a door. Also, if you are full of keys and/or potions, you may not pick up either. This also means that you cannot pass through them until you make room and pick them up.

Keys give you 100 points, much like treasure. You'll either want to pick them up for score, or avoid them to keep the rank down.

Monsters cannot pass through keys, but keys can be shot through. If a key obstructs the path, you may be able to deal damage through it.

In a multiplayer session, the less magically inclined characters (such as the Valkyrie or Warrior) should carry the keys, and allow the magic wielding characters to conserve space for potions.

These smartbomb-like weapons will attempt to damage everything on the screen. They can clear extremely congested areas in the game, if utilized correctly. They are also the only way to destroy Death enemies. If there is a Death enemy that cannot be slipped past, you will likely want to Potion to save yourself from losing 200 health.

The orange potions are indestructible, but the blue potions will be activated when shot. If a blue potion is activated in this way, it will have a reduced effect. This maneuver should only be invoked in emergencies, such as when your character is enveloped by enemies and you can't reach the potion soon enough, or you are overflowing with keys with Death chasing you. Most of the time, you should be careful of doing this by accident. You'll also want to be careful not to attract enemy shots into the potion (such as from Demons), as these will break them with no effect.

It is best to save them for most jam-packed locations in the game that are certain to drain much health no matter how well you play. You shouldn't, however, rely on them to clear every road-block. There are sections that may seem impossible at first, but do not actually require a potion.

In a multiplayer session, the magically inclined characters (such as the Wizard or Elf) should have the first crack at Potions, and allow the less adept to deal with carrying the keys.

Worth 100 points. You'll either want to pick it up to increase your score, or avoid it to help keep your rank low.

Some chests make good barricades. Diagonally adjacent ones can be fired through just like walls. Use good judgment before recklessly picking up any treasures.

In a multiplayer game, picking these up will grant and improve a bonus multiplier to your score, the maximum being x8 in a 4 player game. This seems to be there to encourage competition, because a player who gains a high bonus will reduce the bonus of the other players.

If you kill a Thief enemy, they will leave behind one of these. They are worth 500 points.

Food can have various appearances, but always increases your health by 100. Most forms are indestructible, but be careful not to accidentally shoot the bottle marked with two exes. Also be careful that you don't inadvertently train enemy shots onto it, as that will destroy it just the same.

It is wise to seek out every piece of food in every level, especially considering the diminishing supply due to the ranking system.

Then again, certain pieces of food may just not be worth it if you can't get to it without taking insane damage.

These display as regular floor tiles that flash white. When stepped on, they will open up some area of the level (often a place you can't see or haven't even reached yet).

Usually, you must step on them to reach the Exit in the level they appear in. In at least one level, stepping on them opens up access for enemies that could otherwise be avoided.

Enemies cannot see you, and will not follow you around. However, enemies will keep moving in the last direction they were moving before you went invisible. In addition, firing shots will reveal your location to the enemies briefly. Use Melee attacks for stealth kills.

This lasts about 20 seconds, and can be carried over to the next level. When the power is about to run out, the rate of flashing slows down.

Every few levels, the "between levels" screen will have yellow text indicating that a potion is hidden somewhere in the level.

These special potions are permanent upgrades to your character's abilities. Through them, some drawbacks can be made-up for, and strong aspects can be made even more powerful.

A given player may only receive the benefits from a single copy of a given upgrade - picking up upgrades that you already possess will only give you a regular potion.

Be cautious not to accidentally shoot these potions. If you do, they will activate like a normal blue potion. Demons and Lobbers can break them as well, so beware. Addtionally, be especially wary of the Thief. He can steal the upgrades and turn them back into regular potions.