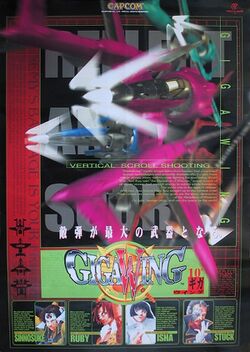 Giga Wing (ギガウイング, Giga Wing?) is a 1999 vertically scrolling shooter arcade game developed by Takumi and published by Capcom on their CPS-2 arcade system board and ported later that year to the Dreamcast console. The arcade version is notable for using a horizontally aligned monitor (much like Treasure Co. Ltd's Radiant Silvergun), something that is considered rare for a vertical shooter.

Giga Wing takes place during a fictional war within a steampunk setting. The player controls one of four different futuristic aircraft and must destroy enemy aircraft, tanks, ships, and buildings using both guns and missiles mounted on the aircraft and a limited supply of bombs which damage or destroy all enemies on-screen when used. The game is based on the player(s) trying to destroy a medallion which possesses great power. Many of the bosses use the medallion as a weapon.