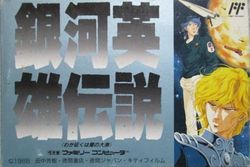 Specifically, it is based on the movie subtitled Waga Yuku wa Hoshi no Taikai (My Conquest is the Sea of Stars), the first animated adaptation of the series of novels, which was released earlier in 1988. The film serves as a prequel to the main OVA series that followed only months later, and chronicles the first encounter — in combat — between Reinhard von Müsel (who later adopted the Lohengramm name) and Yang Wen-li, the two primary protagonists of the LOGH series.

The story is staged in the distant future within our own Milky Way Galaxy, approximately in the late 36th century. A portion of the galaxy is filled with terraformed worlds inhabited by interstellar traveling human beings. For 150 years two mighty space powers have intermittently warred with each other: the Galactic Empire and the Free Planets Alliance.

In the game, the player controls a fleet of starships. The goal of the game is to direct the various commanders of the player character's fleet by giving them specific orders. Eventually, the player will be required to direct massive battles between their fleet and the rival empire's. A Famicom midi variant of the classical music piece Bolero by Ravel plays throughout, lending the game a suitably operatic feel.