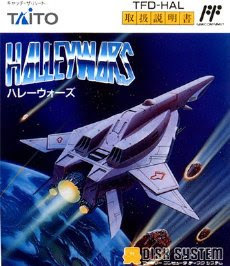 Halley Wars is a shoot-'em-up developed by ITL for the Famicom Disk System, and published by Taito early in 1989. The game is a follow-up to Taito's 1986 arcade game Halley's Comet. The game focuses on rebuffing an alien invasion that approaches Earth by hiding within Halley's Comet. Halley's Comet was last observable to the naked eye in 1986, which inspired the development of the original arcade game.

Though the game is a vertical scrolling shooter whose distinction was that the player had to prevent too many enemies from leaving the bottom of the screen. Each enemy that got past the player's ship would then head on to Earth and cause damage to the planet, so minimizing this number was a necessary condition for victory. Comets do more damage than the enemy ships do. If Earths damage level reaches 100% the game is over. For every 2000 points you score, 1% of Earths damage is repaired.

The game has 6 stages set in locations in space such as, above planets or in asteroid fields. There are end of levels bosses at the end of each stage each with their own weaknesses. There are power-ups, which can be picked up along the way when you shoot particular asteroids or satellites. These upgrade your weapon strength, speed, add explosive pods and shields.

It’s the middle of the 21st century. The armies of Lord Halley are launching attacks on planet Earth. You are the last chance for Earth, piloting a craft specially developed to engage these hordes. You must fight your way through their defenses to the final goal, the alien base. The final battle is about to commence!