Hana no Star Kaidou/Table of Contents 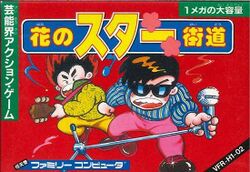 Hana no Star Kaidou (which can be loosely translated as "Blossoming Star Highway") is an action game for the Famicom that was developed and published by Victor Musical Industries in 1987. It is about two musicians who dream of obtaining a recording contract and becoming big stars. The player must control both Moero and Goro on the screen at one time. They run, jump, and attack simultaneously. Each one has their own life count, and the game is over as soon as one of them loses all of their lives. Because of the unituitive controls, and unforgiving game mechanics, this game is considered quite difficult and generally not fun to play.

Hana no Star Kaidou/Table of Contents