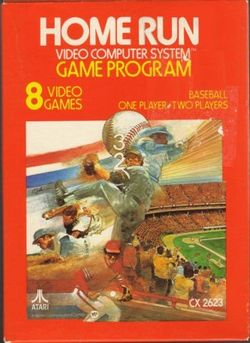 Home Run was one of the eleven Atari 2600 titles that were part of the second wave of games released in 1978. It is a simplified version of the popular American pastime, baseball. Two players can compete against one another, or one player can play against a simple computer controlled opponent, to see who could score the must runs through nine innings.

Home Run contains 8 variations of game play. Four variations are for one player and the other four are for two players. Each of the four different variations features a different arrangement of outfielders, one, two, three grouped close together, or three spread far apart. The more outfielders, the easier it is (theoretically) to catch any of the balls batted away. Once a field catches the ball, the other outfielders disappear, and the player can tag out any of the runners.

Home Run was ultimately judged a very poor representation of the sport of baseball, with it watered down mechanics. It was often used as one of the comparisons with Mattel's far superior baseball offering, Major League Baseball, as a reason for consumers to choose the Intellivision over the Atari 2600. Eventually, Mattel went on to release a conversion of their baseball game for the Atari called Super Challenge Baseball, while Atari released their own improved version of RealSports Baseball. Home Run was released simply as Baseball under the Sears Telegames label. 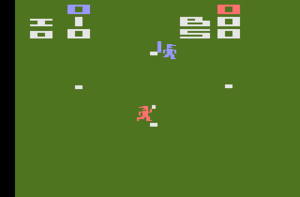 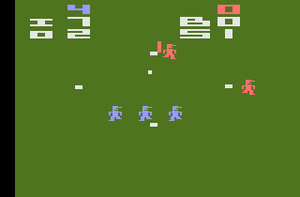 Bottom of the seventh
Retrieved from "https://strategywiki.org/w/index.php?title=Home_Run&oldid=957832"
Categories: