From StrategyWiki, the video game walkthrough and strategy guide wiki
(Redirected from Incredible Wizard)
Jump to navigation Jump to search

Wizard of Wor was an arcade game developed by Midway Games in 1980. Featuring startling crisp graphics and speech synthesis, Wizard of Wor captured players' imagination as easily as it captured their quarters. The game could utter an astonishing 71 different phrases (intended to be coming from the Wizard himself) that taunted the player before, during, and after the game.

Wizard of Wor cast players into a techno-magical mesh of a world, where "worriors" armed with laser rifles did battle in arenas to the cruel delight of an all powerful wizard, bent on proving that magic truly is greater than technology. Players are trapped in a labyrinth where they must do battle with the Wizard's creations in an attempt to drive the wizard out of hiding. But even a successful hit on the Wizard will fail to do him in, and he will return to his fortress to heal up for the next encounter.

The rights to publish Wizard of Wor was distributed a couple of ways. CBS Electronics bid for the rights to publish the game on home consoles. Ultimately, they only released the game for the Atari 2600 and the Atari 5200. The 5200 version was developed by Roklan Software, who also went on to publish the identical version for the Atari 8-bit line of computers. Lastly, Commodore's own development team converted the game for play on the Commodore 64 with remarkable accuracy. 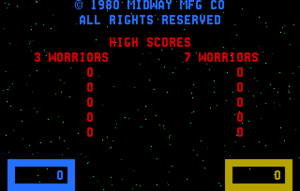 In a post-apocalyptic world, one man has resurrected the arcane arts of magic, long thought to be nothing more than a fairy tale. The world grew fearful of the wizard's lust for power so they elected two squadrons of fighters known as Worriors to launch a strike against the wizard and end his reign of terror. The plan was simple: Enter the Wizard's domain through an entrance to his underground dungeon and surprise him. Little did the squadrons know that the Wizard enchanted his dungeons with a spell that forced inhabitants to wander through its corridors forever. Then he populated it with horrible creatures of his own creation. The Worriors must now fight for their lives. And stay alive for as long as possible in the dungeon of a mad man.