From StrategyWiki, the video game walkthrough and strategy guide wiki
(Redirected from JESUS: Kyoufu no Bio Monster)
Jump to navigation Jump to search 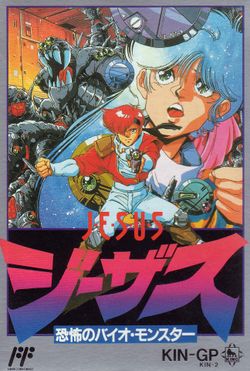 To be clear, the game is not religious in nature. The name Jesus refers to the name of a space station from which the events of the game begin. The game is a cult classic among many Japanese and American retro gamers thanks to the game's eye catching title. Though the Famicom port had a lower resolution than the NEC PC-88 original, this is the version of the game best known to Western gamers. The game received one sequel, JESUS 2.

JESUS is an early example of a command-selection type adventure game. It mixes in movie production techniques, and it has a balance of scenario, graphics, and music. The game was influenced by the Alien movie series, which gained enormous popularity around the time of the game's development. Throughout the game, music has a great effect on scenario development and plays an important role in the final battle with the enemy. The original games contained many mini-games, some of which had to be completed in order to finish the game. Most of these games were removed from the Famicom version, and some suggestive artwork was censored for its release.

In the year 2061, a manned space mission was planned for Halley’s Comet, which would once again be nearing Earth. A team was assembled from eight countries around the world, and split into two spaceships for the mission, dubbed the “Nebula” and the “Corona.” They would depart from the Space Station Jesus.

A primary objective of the mission was to collect gas samples from the tail of Halley’s Comet. These samples were to be gathered not only for the advancement of materials science or astronomy, but also to test the theory that life on Earth may have been seeded by comets. The knowledge the crew gained had the potential to solve one of the last enigmas of biology.

Immediately after extracting the gas from the comet, however, communications from the spaceship Nebula mysteriously stop.

What has happened to the Nebula?