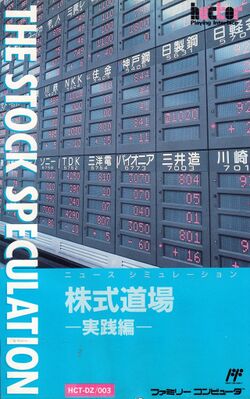 Kabushiki Doujou: The Stock Speculation (株式道場－実践編－, Kabushiki Doujou: The Stock Speculation? lit. Stock Dojo - Practice -) is a stock market simulation game developed for the Famicom by TOSE and published in Japan by Hect in 1989. The aim is to invest wisely in the stock market and develop a bountiful portfolio. The player is given regular money goals to reach before the next target is due and can buy, sell and manage their stocks to achieve as much wealth as possible.

The game uses a lot of public domain classical music, such as the title screen's 8-bit rendition of Bach's Air on a G String. Like most, but not all, NES stock market simulators it was never released outside of Japan.