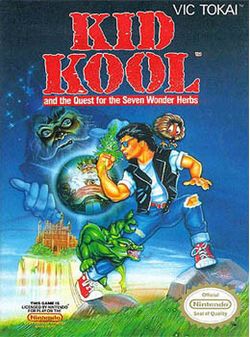 Kid Kool and the Quest for the Seven Wonder Herbs, known in Japan as Kakefu Kun no Jump Tengoku: Speed Jigoku (カケフくんのジャンプ天国 スピード地獄, Kakefu Kun no Jump Tengoku: Speed Jigoku? lit. "Kakefu's Jump Heaven: Speed Hell"), is an action game released for the Famicom in 1988 by Vic Tokai. The game's main character is based on Kenji Sagara (相良 健治, Sagara Kenji?), a popular Japanese child actor who was famous in the 1980s. The Vic Tokai game DecapAttack (Magical Hat no Buttobi Tābo! Daibōken in Japan) and Sega's Psycho Fox are part of the same family of games, sharing various control and design similarities, but feature several improvements to the system which make these games more playable.

Kid Kool is a platform game akin to the Mario series, but with a heavier emphasis on building inertia. Jumping while standing still, or walking slowly, results in an incredibly short jump, while jumping while running will send the player flying through the air. As a result, the controls are rather difficult to adapt to. In addition, the game sometimes requires you to make blind jumps. These will often lead to the player's death unless you know where you're going in advance. If you run too far and then turn around, it can be difficult to build up the momentum required to complete certain jumps.

Levels are not restricted to the height of the screen. It's quite common to jump up through the top of the screen and rise to a second level of platforms. However, forward scrolling on the screen stops while the screen scrolls vertically, and play resumes when the vertical scrolling is finished. There is also a small red creature, "Wicky", that the player can carry, which will eliminate enemies when thrown. The game will gradually progress from "day" to "night" modes as a timer counts down, with each cycle taking one hour in play time.

The main character is on a quest to obtain seven herbs needed to help cure a king from an illness. There are multiple endings to the game, with the ending gained based on the time taken to complete the game. These range from the king having died if the player takes more than three hours, to being given four other rewards, starting with a bag of money for the fourth best ending, a bag of gold and a high position in the kingdom for the third ending, a chest of gems and the princess for the second ending, and finally a chest of gems, the princess, and the promise to rule the kingdom for the best ending.