King of Kings/Table of Contents 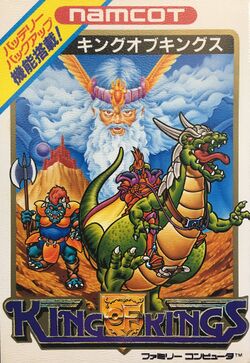 King of Kings (キング オブ キングス, King of Kings?) is a turn-based strategy RPG developed by Atlus for the Famicom and published by Namco in Japan near the end of 1988. Japanese game designer and artist Kazuma Kaneko helped to design the characters for this video game; Kaneko is best known for his work in the Megami Tensei series of video games.

The gameplay is similar to Famicom Wars in a fantasy setting. Units take turns moving across a map, and face off when trying to occupy the same spot on a grid. There are 22 different types of playable units (categorized into people, fairies, dragons and other kinds of units). Human units tend to have a weak overall defense, fairy units are often the least expensive to produce, all dragons except the lizardmen are very expensive to build, and the other kind of units are basically a potpurri of units that combine the strengths and weaknesses of the other three kinds of units.

There is a campaign mode where the player does battle against a computer team led by Lucifer across four maps. There is a multiplayer mode where up to four teams can do battle on eight additional maps. A bonus map based on Japan's greatest swordsmith Masamune is present as an easter egg in this video game.

King of Kings/Table of Contents