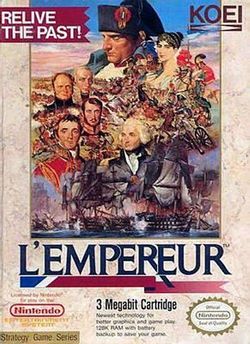 L'Empereur is a turn-based strategy video game for the Nintendo Entertainment System released by the Koei company in 1989.

The user controls Napoleon Bonaparte during the Napoleonic Wars of the late 18th and early 19th Centuries. The goal is to conquer Europe, city by city. The game begins with Napoleon as an army officer, but with victories in combat, the user may get promoted to Commander-in-Chief, First Consul, and finally Emperor of the French, with more powers and actions available at each level. As Emperor, the user also controls Napoleon's brothers, Louis, Jerome, Lucien, and Joseph, as well as Napoleon's stepson, Eugene Beauharnais. The game has both military and civilian aspects. The user can lead armies, act as mayor of cities, and depending on the level achieved, engage in diplomacy with other nations. Very historically accurate, the game reproduces many historical figures and the military of Europe with great detail.

Each turn lasts one full month per year, for a total of 12 turns per year. Although the years change every January, it's in March that most gameplay elements are affected by the game engine (such as the drafting of soldiers and officers, the termination of certain diplomatic agreements, and the collection of taxes).

In each month, the player (as well as all other commanders of cities) manage military and civil affairs for their respective cities. Additionally, every four months (starting in March), national leaders may carry out diplomatic and national affairs.

The crux of the gameplay rests in the actual battles, which take place on special tiled battlefields arranged in hexes. Opposing commanders place their armies accordingly, and then maneuver them around the battlefield into battle. Defenders have the responsibility of keeping city hexes under control while repelling the enemy while attackers have to either take all the city hexes or annihilate the defenders before they run out of food and are forced to retreat. A number of terrain features add depth to the gameplay, such as swamps, forests, hills, mountains, rivers, and tundra. Also, the seasons and weather affect battle, with invasions in the winter months causing bodies of water to freeze over and generally slowing the movement of troops.

Each army may consist of three types of units: basic infantry (which can build and explode bridges), cavalry (which can charge an enemy, allowing them to repeatedly attack a unit in a single turn), and artillery (which can bombard enemies from afar). Each unit has three main factors determining how well they fight: strength, which can go up to 200 soldiers per unit; training, which affects how powerful the unit's attacks are; and morale, which determines how well the unit is at absorbing attacks and avoiding falling into crippling disorder. Additionally, the commanding officer of a unit affects their abilities.

As Napoleon, the player's basic goal is to conquer Europe, but for many players that could be a daunting task as both time and the sheer size of the task require very patient planning and careful strategizing to accomplish this. Each scenario presents an easier goal to achieve, which is basically to have Napoleon be promoted from Commander to C-in-C to First Consul to Emperor.

L'Empereur features a bevy of historical figures, not limited to Emperor Alexander I of Russia, King George III of England, the Duke of Wellington, Marshal Kutusov of Russia, General Blücher of Prussia, and Archduke Charles of Austria. Many French generals, such as Masséna, MacDonald, Soult, and Berthier also appear (and give a great upper-hand to France). Political figures also make appearances, such as Talleyrand, Godoy, and Metternich. While they are horrible military officers, they have talents that can be used in other areas of the game quite exceptionally.

Several nations appear in the game and are reasonably modeled after their real-life counterparts. They include the Kingdom of Naples, the Republic of Venice, Prussia, England, Holland, Bavaria, Spain, Portugal, the Ottoman Empire (as Turkey), Austria, Denmark, Sweden, and Russia.

Some historical events are portrayed, such as Napoleon's Invasion of Egypt, his divorce from Josephine and his marriage to Marie Louise. Napoleon's overthrowing of Barras is also portrayed, although in some events Napoleon can overthrow him peacefully.

Cossacks in Russia and guerrillas in Spain also make appearances, making invading those areas especially aggravating. The Plague can also appear as a disaster.

It's also possible to recreate the Battle of Trafalgar, which occurs whenever Napoleon attempts to invade England (or Gibraltar) from sea. In it, Nelson is always killed but England gets a free naval victory over France.

Beating the game initially can be very daunting. A total of 49 cities have to be captured in a certain amount of time. There are certain steps a player can take to make this task much easier, but it still requires cunning battle plans and good troop management, as well as a bit of luck.

The player should keep in mind that enemy officers can be recruited once a nation is completely conquered, provided he has captured the last city that the enemy held (these officers, though, will only join the army of whomever holds that city, so hold on to it!). This is essential as the officer pool will begin to dwindle later on as the player's empire grows larger.

The player should also keep his fronts managed properly. It's pointless to have more than one officer assigned to a city that is not threatened by an enemy (that is, cities that are not along coasts controlled by the enemy or where an enemy city has access to). Thus, protected cities should have their officers moved to the fronts to maximize invasion and defensive capabilities. Also, all officers in reserve should be deployed, though not right-away if the player wants to see if officers will be needed in certain areas later on.

Lastly, the player should use diplomacy wisely. Declaring war on too many countries will cause everyone to declare war on France, making it impossible to win. Powerful nations, such as Spain, Russia, and Prussia should be placated until all other nations are conquered (or marginalized), then they may be taken out systematically. Trading with another country helps keep their hostility towards France low. Fighting on numerous fronts is difficult as well - try to be at war on only one side, and not with a nation that can attack many of your cities. Simultaneous attacks on different enemy cities help this, by making the front smaller, especially if the first captured city can be attacked by numerous enemy cities.

In battle, the player can employ a variety of tactics and tricks to maximize enemy deaths while preserving his own army.

If possible, lure an enemy onto a bridge, then either blast it with troops or (more reliably) bombard it with artillery, causing the bridge to collapse. This will devastate, if not annihilate, the enemy unit with little trouble on your end. If possible, build another bridge and repeat the process for as many units are able and willing to move onto it.

In general, artillery attacks should be used over straight-up infantry charges. Soften up the enemy with artillery shots and avoid attacking until the enemy is in disorder, and thus susceptible to huge losses per attack.

Finally, if you can, attack enemy reinforcements from other nations. It's always helpful to kill two birds with one stone.

There is one glaring issue with the game. Although there is no set date at which the gameplay ends, there is a natural time limit in place. Officers will age one year every January, and will start to die around age 60 or so. In the early years of the game (up until around 1810) young officers will be drafted for all nations, but eventually no more young officers will appear. At around 1825, officers who were middle-aged at the beginning will start dying in droves, and ten years later, young officers will start dying. At this point, there will simply be not enough officers for any nation to use to command armies with, and, comically, cities on the map will become unoccupied. Eventually, as national leaders die without a successor, whole nations will simply vanish. At any rate, it's impossible to win at that point.

It is not required for a player to become Emperor to defeat the game. As the player conquers more and more cities, eventually it triggers a game event which causes the citizens of Paris demand that Napoleon return to the Capital and be crowned Emperor. If the player does not return to Paris for the rest of the game, they can remain First Consul, and complete the game as such. This however does make meeting the victory condition of European Conquest more challenging, as the player loses the benefit of direct command of the generals (Napoleon's relatives) they gain when becoming Emperor of the French, leaving them only with Napoleon to work with. The option to return to Paris and become Emperor does not expire due to time once it has been triggered. Non-player entities that interact with the player after this point, however, will still address the player as if they had decided to become Emperor, even if they are still First Consul.