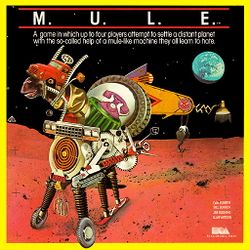 An analogy that best describes the significance of M.U.L.E. is that M.U.L.E. is to early home computer games, what Monopoly is to boardgames: A game that takes a potentially dry subject such as economics, and turns it into a fun game of conniving and backstabbing your friends. M.U.L.E. was developed in 1983, primarily by Dan Bunten of Ozark Softscape, and published by the then-fledgling establishment known as Electronic Arts.

The concept behind M.U.L.E. was simple, but it would go on to breed very complex strategies. Four colonists land on a barren planet, and go on to build a colony around a town square. In order to survive, each player must purchase M.U.L.E.s, which stands for Multiple Use Labor Element, and outfit them with a particular job program, and put them to work on each of their plots of land. M.U.L.E.s could be outfitted to harvest food, electricity, and smithore. Each commodity was essential to successful (and economic) life on the colony. As a result, players could choose to sell their surplus of supplies to other players who might be in need, or sell excess to the colony store for later purchase.

Players who worked cooperatively, would often find their colony prospering, but would contain very little wealth. Once the greed factor of each player kicked in, the picture changes dramatically. By hording one commodity, or many, players could trade off the colony's overall success for their own financial gain. This would typically drive other players to attempt independence from the market by being self-sufficient, or go to war with one greedy player by stockpiling a commodity that the other player might be in need of to force a negotiation. The complexity increases in the Advanced game with the addition of the Crystite commodity. This guide will go in to all of the specifics of how these kinds of situations could potentially arise.

M.U.L.E. was a runaway hit in the early home computer game market, first appearing on the Atari 8-bit line of computers, which allowed for four player simultaneous play with its four joystick ports. It appeared on the Commodore 64 soon after. It also appeared as a specially made game for the IBM PCjr. In Japan, it was produced for the MSX home computer. And when four player support was added to the NES through adapters such as the Four Score and the NES Satellite, an updated, yet faithful adaptation of M.U.L.E. graced the successful console.

Four colonists have been selected to take a transport ship to planet Irata, where they will be left to fend for themselves for 12 months in an attempt to build a successful colony. If they succeed, great wealth will be their reward, but if they get too greedy, the colony will be doomed to failure. Each colonist must make use of the Multiple Use Labor Element robots known as M.U.L.E.s to harvest essential commodities such as food, electricity, and smithore, which form the basis of the colony's economy. Will the colonists work together to help the colony flourish and prosper? Or will one or more players' greed get the best of them and sacrifice the colony's well being for their own financial benefit?