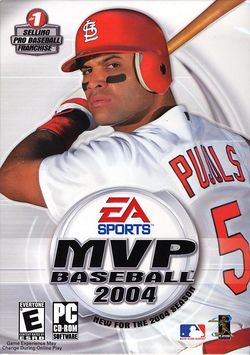 MVP Baseball 2004 is a baseball game for GameCube, PlayStation 2, Xbox and Windows, developed and published by EA Sports and released in North America on March 9, 2004. Albert Pujols is the cover player for the 2004 installment of the MVP Baseball series.