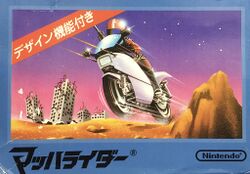 Mach Rider is a futuristic driving video game created by Nintendo and HAL Laboratory. It was first released on October 18, 1985 for the NES, as one of the 18 launch games in the United States. It was released in Japan for the Famicom on November 21, 1985. It was adapted for use in the arcades as part of the Nintendo Vs. Series. Vs. Mach Rider was essentially a modified version of the Endurance Course from the original game. It included a brief scene that revealed Mach Rider's identity.

The year is 2112, and the Earth has been invaded by evil forces. You play as Mach Rider, a motorcycle-riding vigilante who travels from sector to sector searching for survivors and destroying the enemy vehicles who stand in your way.